Ayutthaya, the former capital, caught between pandemic and floods


Ayutthaya is famous for its history and architecture. On August 22 1662, the first MEP missionaries arrived in this, the capital of Siam, where the king allowed foreigners to settle outside the town to trade. Today, on the banks of the Chao Phraya river, can still be seen the location where the first MEP fathers settled. It was generally known as the St Joseph’s camp, with its church of the same name. Ayutthaya, which was destroyed by the Burmese in 1767, is now a must-see site for anyone interested in Thailand. It attracts visitors because of the remains of gigantic Buddhist monasteries. However, in modern times we discover another dimension of  Ayutthaya: aid in times of Covid-19 and flood. We met Father Anthony Vorayut Kitbamrung, the parish priest, as well as Mr Sonthaya Homprathum, called Khun Son, who chairs the parish council. He is a practical man, helped by twenty or so lay persons and some religious. Khun Son testifies to the concern of his community towards the sick and disaster victims. To help him in his work, Khun Son takes advantage of his knowledge of the local area – he himself runs a diner within the grounds of the Wat Pak Kran temple – and coordinates his activities with the diocesan Social Committee, as well as with the canton and the prefecture. For several months, parish volunteers, led by Mr. Khun, have been distributing food aid to families isolated by quarantine or by floods. Many are Muslim neighbours with whom the parish community has close ties, including by marriage. The aid offered contains ready-to-eat products, or food for cooking if the aid is long-term. These occasional donations are in addition to the thirty or so monthly grants distributed on a permanent basis to the needy in the neighbourhood, who are supported by the local group of the St Vincent de Paul Conference.

For its part, the government granted effective and rapid assistance of 5,000 baht per month (130 euros, about half a month’s minimum wage) for two months. Mr. Khun says that the mandatory, well-managed quarantine triggered this financial assistance, plus the distribution of masks. He is pleased that the administration was ready. Fortunately, during the pandemic, the parish did not have to mourn any deaths. But the disease struck many monks during the morning offerings, and also the local markets, which resulted in the closure of the Hua Ro market, which sells fresh produce. Even today, cremations are immediate, without any prayers or gatherings, which brings great sadness to people.

Recently, Khun Son’s team also implemented flood prevention measures in at-risk streets in two surrounding neighbourhoods. Some of the faithful who were born in Ayutthaya and work in Bangkok provided pumps for this purpose. They have a strong  link with their parish of origin, which is strengthened by the memory of those in their families who have passed away. For its part, the local administration provided fuel.

Mr. Khun said that when the waters rise, tempers flare. People then shelter their belongings, knowing that every five or six years a flood comes that is stronger than the others and causes damage, apparently duemore to the management of the dams than to the rains themselves. For Khun Son, the way that St. Joseph’sParish in Ayutthaya organizes aid creates a lot of bonds. Everything is done cordially, without any panic, withthe hope of returning to a quiet life. 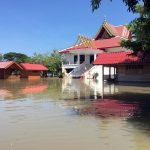 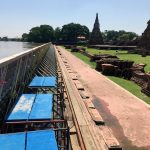 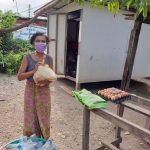 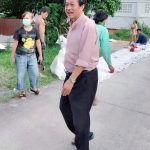 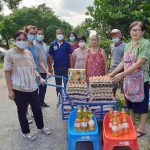 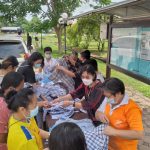 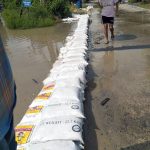 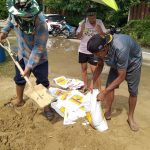 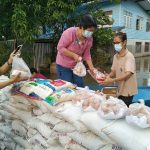 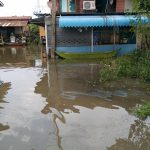 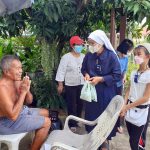