Being with the young Christians of Singapore


Tammy is in charge of the group of youth of Our Lady of Perpetual Succor, OLPS parish. She has become an essential figure for Youth Animation in the parish. A soon-to-be mother, she shares her doubts, joys and pains during her eight years of service for OLPS.

First of all, who are these young people?

We take care of adolescents who are 15 or 16 years old. That is our main age group. They have normally followed catechism since their seventh year, and in august of their sixteenth year, they all receive the sacrament of confirmation. After their confirmation, and according to their Church experience, some decide to remain, but most of them leave. It is our job to do our best to make them feel good being in the community and feel like staying. Instead of focusing on the Bible, we show them that the Church is a safe place, which can be their home.

Most of the young people of the parish come from well-to-do families, but more and more come from the lower social class. Singapore being one of the most expensive cities in the world, it is not surprising that people find themselves in financial difficulties.

The fact that they come from different schools is a source of discrimination! Most of the youth come from catholic schools. There are however, one or two youngsters coming from other schools. They speak a different language, they have different manners, and behave differently. That is where the discrimination begins, when they find themselves together for catechism. We work on this, because more and more Filipino and Indian migrants themselves constitute more than a quarter of the parish. Things are evolving and the parish is diversifying. This changes the manner in which we address the parents and the young people: the language is different, the manner of communicating is different.

What do young people look for when they come to the chaplaincy?

They come first of all for their friends. If a youngster decides to come on a Saturday, he will call his friends and persuade them to join him. They come secondly for the good atmosphere of the chaplaincy. Most of the young people come from families in which love and affection are not expressed, as is the culture of Asian families. They look for affection : we cuddle them a lot! Some wish to relive the same experience as they had during camp, where they felt a strong presence of God for the first time. We are quite charismatic, we pray together often. This has both advantages and disadvantages for the youths who will stop believing if they do not feel God’s presence, and feel far from Him.

Some look for comfort. Most of the time, they have problems that we can resolve, such as problems of the heart. But I have faced more serious problems, and since they have not told their parents and don’t want to talk about it, we send them to see a priest who will help them. If there is need of therapy, the parish will pay. As they grow older, it becomes more and more difficult to listen to them because they do not wish to confide to us, seeing us only as teachers, or authority figures. They come only when the problem becomes more serious.

What do you do with them?

Every Saturday, we have a session during which we do various activities always based on the Sunday Gospel. These can be evenings of praise or crafts workshops. The most time-consuming and tiring work is the preparation of camps. We organize two camps per school year. They consist of big gatherings of 100 to 120 young people and a hundred volunteers. We prepare them as a program of seven days split in two: a camp in November (three days and two nights) for 15 years old youth and another in June (four days and three nights). The camps constitute the biggest part of our job and many youngsters come only for that! Among the hundred or so youngsters, few of them stay after having received confirmation. We therefore do our best to give them the best experience of the Church, and give them a sense of community, of hope, in order to give their faith a chance. We try to include their parents in this program. As the years pass, we realize that all their problems, wounds, and insecurities come from their family. That is why we organize two meetings per year with them, in order to share with them what their children have done during the year, since most of them do not know. We invite them on the last day of the camps in order to explain to them the changes that have occurred. There are times when the youth change after the camp, and they are so transformed that they wish to see Christ everywhere, but when they go home, they see that this is not the case. In these cases, we ask the parents to have a conversation with them.

At this age, it is difficult to capture the attention of youngsters. How do you do it?

I deeply believe that each human being, even the young and insolent, wants respect and kindness. That is what I try to apply here. It is never easy. There are arguments, problems in couples, insults… So we try not just to talk to them of the Gospel, but also accompany them in their everyday life. We also ask them where God is present in their lives. These days, there is depression and even thoughts of suicide in young people aged 10 to 12. For this reason, we try to make the sessions “true” for them, and this changes according to their age since desires vary in young people.

On Saturdays, there are sometimes only twenty or thirty young people. We try to help them understand Mass, because to them it seems to be always the same thing. In this dynamic, once a year, Father Bruno Saint Girons celebrates a Mass for the young where he explains the most important steps and, keeping to the liturgy, he explains some of the gestures or words that they may have difficulty of understanding. Our main competitors are the school, extra-curricular activities and homework since the competition is strong at school for the students in Singapore.

You have been at the service of the young people of OLPS for eight years now. What made you accept? What have you learned from this experience?

There were always part-time employees, but I was the first full-time employee. The former parish priest, who left in 2015, decided that they needed someone at full-time and he asked me to consider the offer. At that time, I had just left my post and I had decided to help my mother in the handicrafts of Peranakan (the traditional handicrafts of the local population of Singapore). When the priest made me this proposition, I initially refused. Then I went to see Father Bruno Saint Girons, who had been my spiritual counselor for a long time. He asked me simply, “If you do not do it, will you have regrets?” And I accepted.

I think that I learn new things each day, and that I will always learn more from this job. It is two different things to belong to a parish and to see it from the inside. We meet parents, catechists and even adolescents who are broken, traumatized and I know there are many things I should do. I believe that I have learned to be more open and tolerant. When it is difficult, I do what I can and leave the rest to the Holy Spirit. It matters little what I bring to the table, because God can make it into wondrous things, as He did with the five loafs of bread and two fish. Each time, he works wonders! That is what pushes me to carry on. When Father Bruno Saint Girons was at the parish, without him, I would not have succeeded. When I felt like my life was falling apart, I called him. We would go for a long walk, and I would confide to him all that was in my heart. The community and my family are also there for me.

You are a good group coordinator. You also make it a point to get to know all the young people individually. How do you do it?

At first, it took me one year to get to know the young people. I had a cup of coffee with them, one by one, and I asked them what their dreams were, and what they expected from the Church. The following year, we did nothing special, just Bible groups, but it allowed us to take a step back and reflect. Our ties were strengthened. Today, the number of young people increases so fast that it is difficult to meet and get to know each one of them. Maybe that is why few of them stay. Therefore, we try to grow not in numbers, but in depth. For the companions who have the most difficulty, we go each year to the protestant church of Singapore, where the Global Leadership Summit is retransmitted from Chicago. It is a summit where influential people intervene in order to allow the participants to improve their skills of speech and persuasion.

Your father is a Muslim and your mother is catholic. Did you have to choose at some point in your life?

I never had to choose between the two. My mother strongly insisted that I not be forced in my faith. That is why she did not baptize me when I was a baby. As for my father, he is Muslim only by duty. He does observe Ramadan and does not go to the mosque. My mother told me that when I was 5 years old, I asked her why all the other children of catechism were baptized but not me. She explained it to me, then asked me if I wanted to be baptized. I said yes. Since I don’t remember myself, it is important for me that the young people know that they have the choice.

Being married since last year, and a soon-to-be mother, do you think this will change your relations with the young people and will you continue?

I have no idea. The young people closest to me call me mom so that will not change me. I feel like I’ve been a mother for a long time now. I suppose that my maternity won’t change my relations with the young people, but who knows? In any case, I will have to reduce my rhythm, which is intense. I’ve been thinking of changing my post in the parish, but nothing is yet decided. Whatever the case, the past eight years have given me a lot from a spiritual as well as human point of view. 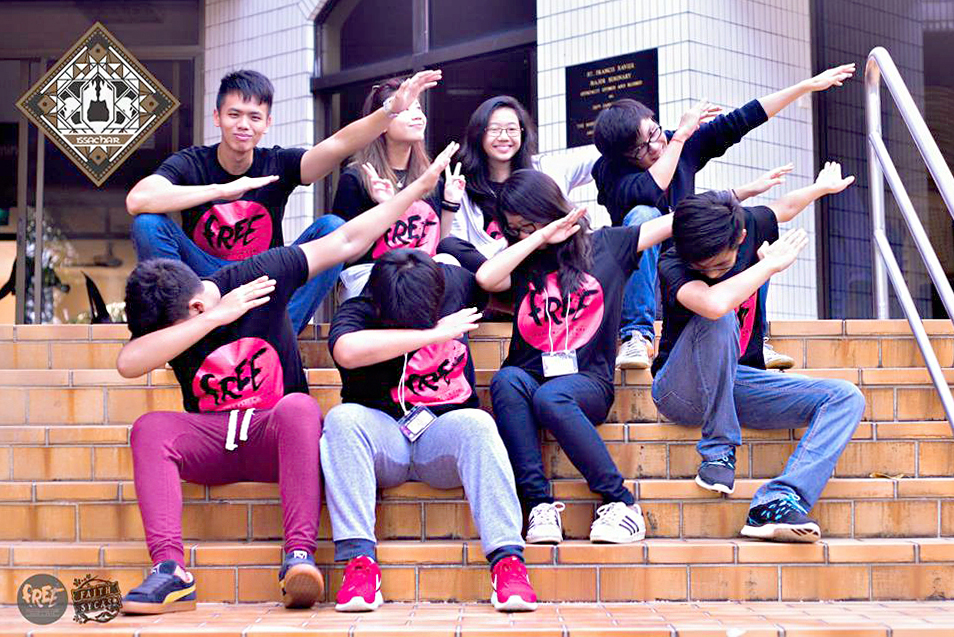 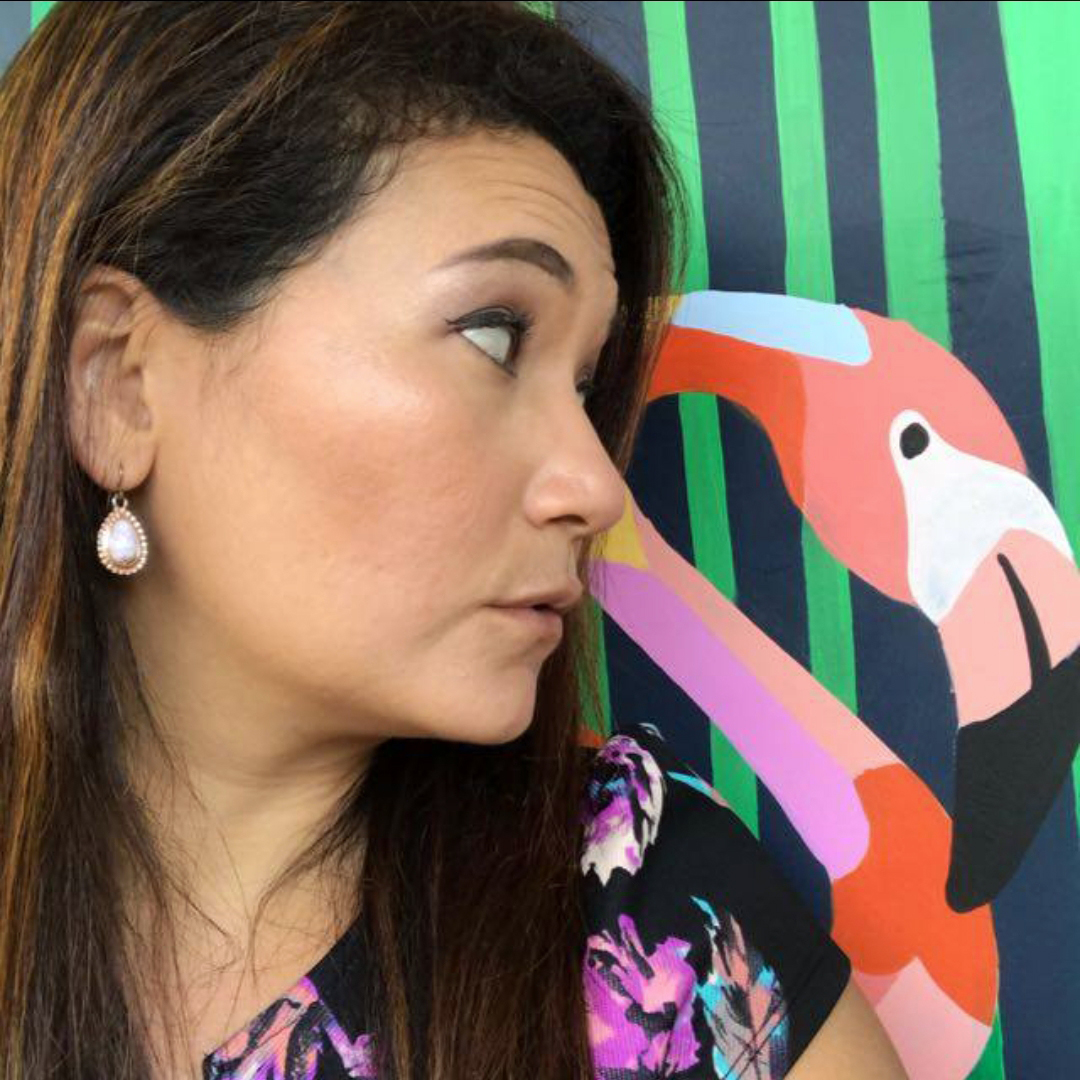 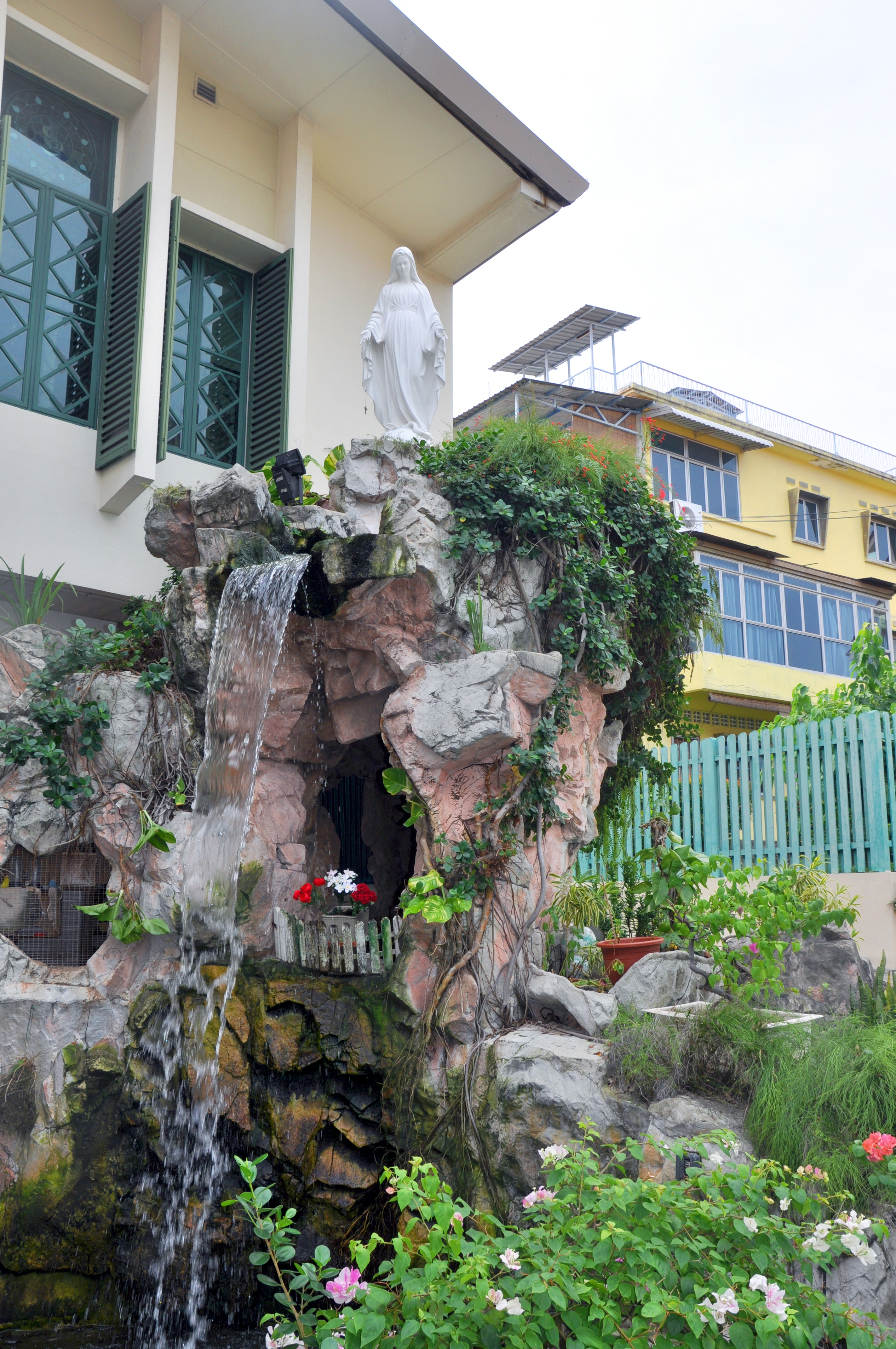 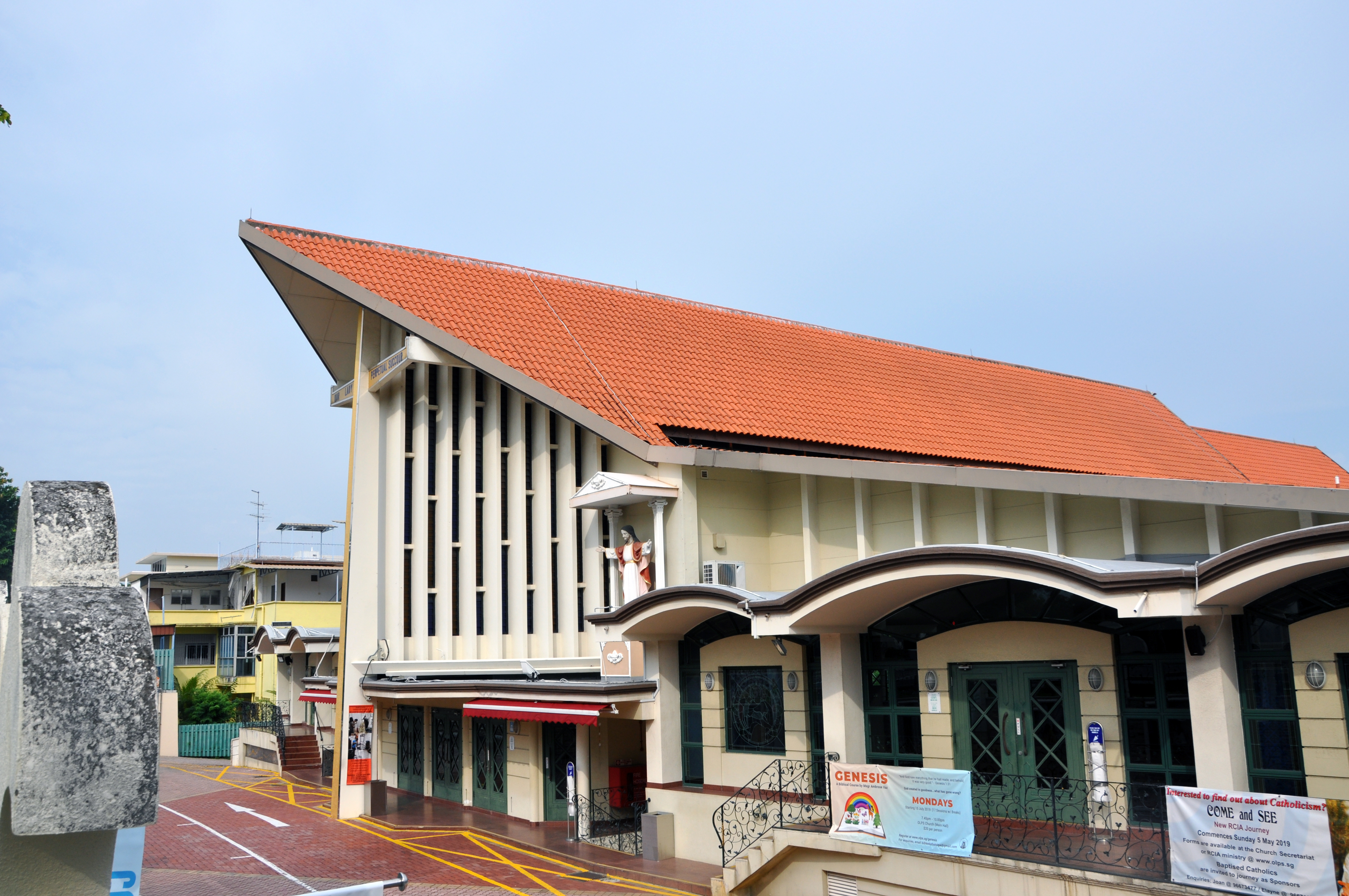 Include the voices of the poor and the young