Father Antoine Meaudre is a missionary among the Karen people. He discusses the challenges of finding catechists, teaching prayer and strengthening faith so that communities take charge of their Christian life. An interview with Father Henri Bonald for a collection of stories about missionary life (Missionaires en Asie [Missionaries in Asia], Michel de Gigord, 1981) caught my attention during my years in the seminary: in it he spoke of the need to ‘plough your own furrow’ and described founding Christian communities before then leaving them to others to make them grow as soon as they had developed some autonomy. That is how I understood missionary life: we are called to replace ourselves as soon as we are no longer required, to clear the land or sow and then let others reap. MEPs have different abilities and missionary approaches, but they all have this one objective: to hand over responsibilities as soon as possible to the local Church, which means detachment and confidence are required insofar as our successors do not always seem ready to take over the baton. This raises the question of priestly fatherhood, and when it comes to missions, this is not just an abstract argument: even if Christ enjoins us not to call anyone father except our Heavenly Father (Matt. 23:9), it is difficult for us to see these budding communities and these hearts, where faith emerges, without feeling an attachment and a joy which are akin to fatherhood, like Saint Paul towards the Corinthians (cf. 1 Co 15-17). The relationship of the Corinthians with their founder is a fine example for us who are “clearing the ground” and witnessing the birth of Christian communities: the bonds of affection are very strong, but Saint Paul knows that his mission is to continue taking the Gospel to other places.

Baptist communities, of which there are many in the region, operate on this model with varying degrees of success:some of their missions collapse due to insufficient foundations or too few visits from catechists. But those that have survived seem much stronger than our Catholics: the faith is stronger there, they are better trained and more missionary, while many of our communities still seem to be spiritually at the bottle-feeding stage and, without our support, would soon crumble. It seems that in some areas the transition from “milk” to “solid food” takes longer – “I gave you milk and not solid food because you could not bear it” (1 Cor 3 ). The ground that receives the Gospel is more or less fertile depending on the location, the crops or the time. This brought the entire Maetan sector team – three Sisters who love the Cross, three Karen catechists, Christian leaders in each community and a priest – to reflect on our method of announcing the Gospel. Four years ago, I started pastoral work in my sector, alone: no catechist, poorly trained Christian leaders and Sisters focused exclusively on managing the boarding school. Knowing little of the Karen language – and when it comes to anyone over 30, very few adults speak Thai – and no experience, I just focused on what I could do: visit families as much as possible, teach Christians to pray. Then nuns joined me, after that two then three catechists and the pastoral work expanded, as did the training. The goal was to train Christian leaders as well as a few leaders in each village to become missionaries in their own way; then to retain children and young people by sending them to study in Catholic boarding schools in the region. If the work of evangelisation brings us satisfaction, it must be recognized that, as far as these two objectives were concerned, the results were somewhat meagre. And it’s not just a matter of time or patience. We had assumed that our frequent visits would strengthen the faith and commitment of leaders in these communities. Many indeed were very pleased. There is however a flip side: Christians get used to the priest teaching, the catechists leading the prayer, the nuns organising wonderful activities, and they get into the habit of sitting at the back and attending as spectators to the worship offered in their name, and to all the activities being organized from beginning to end by those they see as ‘religious professionals’.

From spectators to doers

It becomes easy for them to feel that they do not know what to do, and not to read, and that it is better to leave these complex matters to competent people. Coming from an animist background, they are accustomed to delegating matters relating to the supernatural world to the shaman who tells them what to do or what not to do, and offers a sacrifice on their behalf. Many Christians are tempted to act in the same way with the priest and remain passive, just trying, with a few blessings and good deeds, to ensure a modicum of protection against the misfortunes of life. All the more reason to provide them with training – that’s what well-meaning colleagues say to me – but most of them answer that they can’t read and that they are no longer at an age when they are able to learn. I’m afraid the truth is that they are quite happywith us coming to them regularly, which is pretty good in their view, compared to the Buddhists who come to the temple once a year. Maybe we should rely on  the younger community leaders; but the candidates are few and the departures to Bangkok multiply. I had the opportunity to discuss this issue with a Xaverian Sister who came for a camp in the area. She shared with me that, from her missionary experience, ‘the omnipresence of consecrated persons can, in certain cases, be an obstacle to the growth of the local Church’. This may be a difficult thing to hear in areas where there are very few priests, but I understand it like this: you cannot continue to bottle-feed a child of walking age; they must learn to feed themselves. Obviously this does not mean depriving them of the sacraments, but rather issues relating to organisation and providing some autonomy in nascent communities. Some of our villages are fragile, like vegetables that have been boosted with fertilisers – the growth is perhaps faster but it will remain very fragile if we do not allow them to gain strength themselves by facing challenges.

It seems to me that if we continue to do everything for these villagers, their faith will remain very fragile. This very active involvement (prayers in families, help with road construction, support for many young people in their studies, etc.) has the advantage of not leaving anyone by the wayside: some families are going down the path of following Christ, others ask for baptism, and all this in a difficult context (drugs, materialism, arrival of large numbers of Buddhist monks, dynamic Protestant churches, rural exodus, etc.). But without the emergence of local Christian leaders, we risk creating communities on life support, and when we leave, which will happen sooner or later, everything couldcollapse. Faced with the requirement for training, several difficulties arise: many adults have never been to school and, for some, the idea of learning seems to put them off. Others may be wondering why they should undergo training when knowledgeable people regularly visit them, people who – in their eyes – teach better than they ever could. Another issueis the instability of many young adults who regularly go to town to earn a little money. And, finally, in certain villages, it is not easy to find exemplary Christians (stable family life, not dependent on either alcohol or drugs, and having a solid faith) who are motivated and ready to speak confidently in front of others. Like Father Henri Bonald, Saint Francis Xavier or Saint Paul, I would like to found and then entrust, as soon as possible, the helm of the vessel to aperson from the Karen community who will be able to take care of this flock. The concept of detachment reminds us that the priestly notions of father and pastor are inseparable from the figure of the steward (Luke 16:4), who is not the master of the house, nor the owner of the flock, and who will be accountable for his conduct to  the Father and not tohimself.

Regarding our second objective: the training of young people in the Maetan sector, there is still a lot to be done. The Joseph-Quintard centre plans to train these future leaders of the mission: when they arrive at college and high school, the young people of the sector spend several years alongside the sisters and the priest; in addition to their studies, they learn to pray and serve, to grow in a healthy and joyful atmosphere. Adolescence being what it is, even here the results seem meagre, after five years of effort, training and patience. For many young people, there is a strong temptation to escape the discipline and to taste absolute freedom in the Buddhist and government boarding schools in the sector. The last holiday camp for teenagers revealed the strengths and weaknesses of pastoral care of the Church of tomorrow: sixty-five teenagers gathered in the village of Tohoki for three days of study, prayer, games, meetings, etc. A great success for the sector; yet some villages did not send a single person. A catechist told me that about ten years ago, anyslight activity aroused some level of enthusiasm among young people, Christians as well as Buddhists. Times have changed and some don’t even come to the Christmas fair in the neighbouring village any more. Addiction to mobile phones has a lot to do with it, but, more generally, there is a constant searching for ‘Kwam Sanook’ (fun, distraction) which results in some of them only coming together for football or parties; and then add drugs to this situation, which are omnipresent in the sector, without the authorities doing anything (this is an understatement). It is difficult to trainresponsible and motivated young people under these conditions, but we are asked to sow, not to worry or boast about the quality of the harvest. In any case, the young people who came to this camp are asking for more of them; also, I was impressed by many of the trainers and facilitators, which is a positive sign for the future. 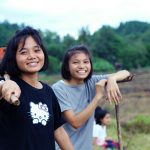 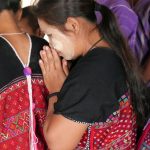 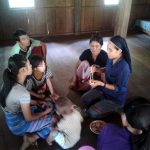 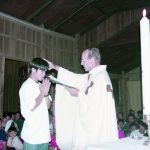