Construction of the Presbytery is progressing little by little


In Myé Gné, near Mandalay, construction of the presbytery where Fr Prodhomme is living is not moving forward. It still hasn’t been connected to the electricity network despite four years of unsuccessful requests. It is like an obstacle course between the pandemic, administrative hurdles and corrupt officials. ‘Therefore do not worry about tomorrow, for tomorrow will worry about itself. Each day has enough trouble of its own’. (Matthew 6, 34). And ‘Cast all your anxiety on him because he cares for you’ (1P 5, 7).

It has now been four years since I started submitting requests for electricity, to be connected to the national grid. Four years that I have been getting the same answers, namely: ‘Your file is in progress. You are on land that belongs to the Myanmar national railway company, you should come to an agreement with them. You are too far from the main supply to be connected. It is possible to connect you, but it would be too expensive.’

Long story short, answers come one after another but the project makes no progress. Even though, for four years now, at each Christmas, all these different groups of officials receive a little present. But nothing happens.

December 2020, Christmas is here and, this time, God seems disposed to help me in this project. I receive a notification that the national electricity company is prepared to connect me to the network. The officials in charge of the project would like to meet me to finalise the proceedings. After a consultation, everything is finally agreed. We agree on the estimate and on the works schedule. Mid-January 2021, the line is finally put in place, the poles, high voltage wires, transformers, safety barriers, electricity meter, in short everything is finally ready, there are only three cables left to connect. Time passes and the last three cables remain hanging in the air, as if time has stopped. I was told that, for the final connection, I have to make another arrangement with the appropriate officials. However, everything has already been paid for: materials, line installation, labour, etc. Even so, one has to show even more generosity to finalise the project. I decided to wait, despite my impatience to see the fruition of this project for which I had waited so long. Groups of officials arrived one after another to check the quality of the site and the installation. All of them receive little envelopes but the three cables remain hanging in the void.

A trip from Mandalay to Yangon

I received a notification that my visa had been extended for a year and that I would have to go to Yangon to pick up my passport. This is at the height of Covid-19, and various steps have to be followed to travel from Mandalay. I plan only to stay for two days in Yangon, just enough time to pick up my passport. However, by the time of my return journey, the rules have changed. A negative PCR test is required for the flight to Mandalay. So I go to the screening point to get a test. Arriving very early in the morning, I am given number 338. I have a feeling that the wait will be long and tedious. I decide to move slightly away to the steps of the old town hall in Yangon. Sitting there, I look at all those people who, like me, are waiting their turn. I notice the impatient ones who discreetly slip a few notes into the pocket of the nurse who is guarding the entrance, those who arrive accompanied by officials and who do not need a number, and I realize that I am closer to number 500 than the number I am holding in my hand. A young Burmese woman comes and joins me on the steps of the town hall. A beautiful and graceful young lady, dressed in traditional costume, with long hair. Like all the other Burmese who are waiting, she is immersed in her mobile phone. Facebook, Instagram and Twitter are the daily recreation for Burmese of all ages. So we do not get to meet. Suddenly my telephone rings. It’s Aunt Merry, a parishioner who asks how I am and wants to see me. The fact is that each week Ms Merry brings me a cake that she has made herself. She has just got a new recipe from her daughter and is eager to bring me the cake that she intends to bake. We talk about this on the telephone, then we talk about the health situation in the country, about my return to the parish and other everyday matters. We finish with traditional blessings that are exchanged in accordance with local customs.

When I hang up, the young Burmese lady sitting beside me turned to me and congratulated me on my Burmese. Even though she had been immersed in her phone apps, she had followed all of my conversation.

So we started to chat and introduced ourselves. She works in a local bank, is very happy with her position in society and with her salary, and also happy to be living in Yangon.

I told her about my situation as a Catholic missionary priest but, when she heard what I did, she disappeared. I decided not to worry about it. Burmese people are sometimes unpredictable! As it turned out, she had gone to look for a chair for me, as she did not think it was proper for a priest to be sitting on cement steps. I tried to refuse her offer but she insisted, so I gave in and accepted her kindness. We continued introducing ourselves. She told me that she had been betrayed; she was about to get engaged but, a few days before the engagement ceremony, she found out that her boyfriend was cheating on her. She had been very disappointed by this infidelity and had a poor opinion of young Burmese men: she thought they liked alcohol and parties and were unfaithful. She confessed that she did not want to start a new relationship and would prefer to live as a celibate.

I told her about my current worries. A presbytery whose construction is not progressing because of dozens of administrative problems, and an electricity installation that is suspended in mid-air. I tell her about all my anxieties, as a great deal of money was spent on these two projects that seem to be impossible to complete. She listens to me and answers that, as far as the presbytery is concerned, there is nothing she can do but, on the other hand, her sister works in the management of the company that provides the country with electricity and she will speak to her; then she asks for my telephone number.

11.30 rings out and there is an announcement that the screening centre is closing and will reopen at 13.30. It is the lunch break and number 200 has not yet been called. I invite her to go for a plate of rice in the little stalls behind the square. She agrees and I order some fried rice and she has a plate of Burmese noodles, Bagan style. But, when it comes to paying, she refuses to allow me to pay the bill. New local customs and traditions dictate that ordinary people treat the priest and not the other way round. I do not argue because I know I wouldn’t win.

At 1.30pm according to our watches, we returned to our places and, very soon, her number was called; we said our goodbyes using the local blessing formulae. I continued waiting patiently. As it turned out, I finished up in the last ten and, at 5.40 p.m., I left the centre with a negative Covid test which, as it happened, was of no use to me because, when I got on the plane, the test deadline – its validity is 36 hours – has been exceeded by 45 minutes. So I couldn’t travel on the plane. I then had to take another test and buy another ticket! The story could have ended like this, but last night I received a phone call from this young Burmese whom I met on the steps of the old town hall in Yangon. She had spoken to her sister about me. My file has been reviewed and does not contain any anomalies. As is the case for most people here, my difficulties had been created by corrupt grassroots officials. The national company insisted that the local officials complete my installation and, according to them, this very morning the workers will come and make sure that my power line is connected and that the meter is installed with all the usual seals.

In fact, since early this morning the workers have been here and are busy, because everything must be operational by tonight. So everything gets sorted out in the end! When will there be a meeting resulting in the resumption of work on the presbytery? 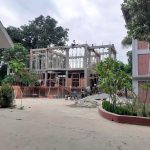 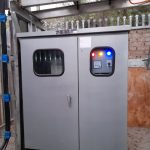 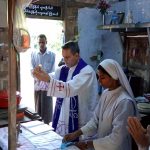