Death of Yiyei Hym and Covid-19 in Koh Roca


Yiyei Hym (grandmother Hym) was the first Christian in the Koh Roca community. She died on 19 March 2020, the day of Saint Joseph, ‘patron saint of a happy death’, at the age of 74. She will remain a model of Christian charity and generosity for everyone. One day, Yiyei Hym agreed to sell a parcel of her land to the church, at a price of half a US dollar per square metre. Father Gerald, who was the parish priest at the time and who admired the straightforwardness of Yiyei Hym, adjusted the total to correspond with land prices at the time, which were one US dollar per square metre. It was a gesture from Yiyei Hym that showed her generosity. Some years ago, Mrs Dana was in charge of looking after the patients under the care of the Apostolic Prefecture of Kompong Cham and who came mostly from isolated villages.

One day she came to me and asked:

‘Can I spend some money to buy blood from the hospital for a transfusion for a sick lady patient?’ I answered: ‘You know that we have a budget for that… Why are you asking me this?’ ‘It’s just that, every two or three months, I give blood for our patients who need a blood transfusion. But as I gave blood last week, I can’t give it again immediately… The thing is, there is a patient who needs a transfusion; as we don’t usually buy blood for our patients, I came to ask you if I can buy some?’

In the end it was one of our young staff members, Ravi who went to give blood for the patient who needed it. That day, it was the sensitivity of Dana that moved me. This Dana, who was so good and altruistic in her work, was none other than the daughter of Yiyei Hym. They say that the fruit doesn’t fall far from the tree… In the years from 1986 to 1988, when she was just a child, Dana had problems selling the sweets that her mother prepared for travellers on the road to Kratie, where they lived in poverty. Hym had five children, three of whom married; but their incomes were not enough to provide much help to their mother, who had separated from her husband. The truth was that he was an alcoholic who often beat her. In addition, she was ill with tuberculosis. In these circumstances, in poverty and sickness, Yiyei Hym decided in 1989 to return to Koh Roca, the village where she had been born. Very quickly she went on to Phnom Penh, the capital, hoping to get treatment for her tuberculosis. She met up with one of her friends, Mrs Thou, a faithful Catholic from St Joseph’s Church in Psaar Tauch and asked for her help. Mrs Thou had a son, Phon, who worked as a driver for the Missionaries of Charity (Sisters of Mother Teresa), in their property on Boulevard Monivong. Phon made arrangements with the Sisters for Yiyei Hym to convalesce with them. The care provided by the Sisters resulted in her recovery; more than that, her gratitude for the kindness of the Sisters pushed Hym to get involved in Christian life, then to become a Christian herself.

When she returned to Koh Roca in 1992, she commenced her catechumenate with Father Gerald, Sisters Xavier and Pelagia and the catechist Mom, in the church at Kompong Cham. Gradually, Hym gathered a group of people around her who then became catechumens in their turn. Such were the beginnings of the dynamic Christian community in Koh Roca, seeded by the enthusiasm and dynamism of Yiyei Hym.

An example of generosity

During the last months of her life, Yiyei Hym had a lot of difficulty breathing; so we went to celebrate Mass in her house once a week. With great patience, she offered her pain to God. When she received Holy Communion, she would whisper: ‘Lord, thank you for the Christian faith. Now, I am ready to come to you.’

A few days before she died, two police officers came to the church in Koh Roca to remind us of the measures recently introduced by the government because of Covid-19, including the ban on any religious gatherings. Sisters Marie Hien and Theresa Gam, who had just returned from their annual retreat in Vietnam, where they had been working for this community, were asked to isolate at home for two weeks.

At that time, I had a cold that worried people around me, who thought I might have caught coronavirus and were afraid to catch it from me. As a result, the preparations for Yiyei Hym’s funeral, as well as her burial, took place with the involvement of just a few persons, with no other priests or Sisters. Those who wanted to could pray in Yiyei Hym’s home during the seven days after she passed away. In accordance with local custom, we also celebrated Mass for her on the third and hundredth day after her death, next to her grave.

After the departure of Yiyei Hym, her example of generosity continues to inspire us. Sisters Marie and Gam are doing incredible work in Koh Roca. Recently, they gave permission for the construction of a little wooden house for a poor grandmother in Orchlong village.

Sisters Tharin and Socheath, like the two Sisters in Koh Roca, do what they can, with simplicity: distribution of masks, soaps, disinfectant and notices with instructions for the prevention of Covid-19. When they went to distribute materials in the local health centre in Koh Roca, their work was greatly appreciated by the doctors there. Also, when they went to isolated villages such as Prei Totung and Bok Knao to visit people and support them, they were greeted with open arms. These are just small things, but this is how we are participating in the efforts that the government has requested the population to make, for the good of all. 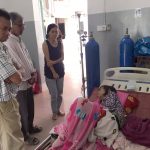 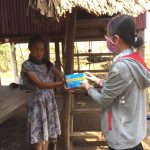 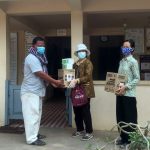 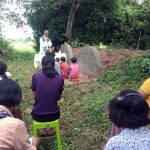