In Mananjary, in the east of Madagascar, the St Anne hospital has just opened its doors after thirteen years under construction. This project for a ‘hospital for the poor’, led by Father Jean-Yves Lhomme, MEP, is being supported by a number of French associations who have offered their skills to ensure that the hospital is built to the highest environmental standards. The Lorraine Mutual Aid Association for the St Anne Hospital in Madagascar (ALEHSAM) was founded on January 23, 2010 in response to a request from Father Jean-Yves Lhomme, a missionary in Madagascar and the hospital’s project manager. It was during his visit to Marly near Metz in February 2009 that heexpressed the wish for an association to be created in the Grand-Est region of France to provide supportfirst for the construction and then the operation of the hospital. The St Anne Hospital is a hospital for the poor, located in Mananjary. At the request of Mgr José Alfredo Caires de Nobréga, Bishop of Mananjary, Father Jean-Yves Lhomme, of the Paris Foreign Missions, designed and built this hospital with ecology as the guiding principle. This has resulted in guidelines being laid down and several achievements.

The biological water treatment plant uses a cascade filtration system that works without external energy, just by gravity. It is completely autonomous and ecological. It is undoubtedly one of the first biological treatment plants in Madagascar.

Electricity is provided by a solar photovoltaic farm comprising 140 panels and supplemented by three generators, which are used mainly for surgical operations. Photovoltaic panels were preferred to wind power because of the lack of dependable winds and the risk of cyclones, and also preferred to hydroelectric power because the Mananjary river is too far from the hospital. It was the Electricians Without Borders NGO that installed the hospital’s electricity supply.

Two parabolic solar ovens have been installed for cooking food; this is in addition to the gas cylinders in the kitchen. Biogas was considered but would have required a herd of more than one hundred zebu. The hospital has an incinerator for hospital waste and uses biodegradable cleaning products.

Teams also planted trees on nearly ten hectares as part of reforestation. Some of the food for patients and staff will be produced locally by keeping bees for honey and growing rice  without pesticides or fertilisers around the hospital. All these constraints have costs attached, especially in a poor country like Madagascar, but the desire to protect nature and the planet and to provide quality care are vital for all those involved in the St Anne Hospital.

Providing drinking water to the Hospital

The Association for Rural Development in Autonomy and Respect (ADRAR) is a small association in Lot-en-Garonne that for several years has been involved in the construction of the St Anne Hospital by financing the drilling and pumping of drinking water. The organisation helped set up the biological treatment plant. ADRARwas present on the SAH site last November in the person of Hugo, a technician specializing in this type of system.

The purpose of our association is to provide drinking water to communities: villages, schools and, in this case, hospitals, and, downstream, to install equipment enabling clean water to be discharged into the natural environment. This is what we have done for the St Anne Hospital in Mananjary. In 2011 we drilled down 42 metres and installed a pump at 31 metres; this pump is powered by photovoltaic panels installed on high racks and protected against malicious damage. The water is fed into a 13-metre-high water tower fitted with two tanks, each with a capacity of 10,000 litres. With this installation, the hospital has a completely independent source of clear and clean water.

The wastewater treatment plant (WWTP) was more complicated. This consists of several elements: at the top is a screen that retains all large objects foreign to the proper functioning of the system; and a first flush (a sort of big toilet flush) of 1,200 litres which automatically pours the waste water into a first bed; this causes a kind of water slide. The first bed of 120 m2 is filled with gravel, the coarsest at the bottom and the finest at the top; inside this bed, which is a kind of large basin, pipes have been installed that bring the waste and other water to the bottom (pierced pipes that serve as drains). In this way the wastewater is filtered for the first time. This is repeated a second time with a new flush, a new basin, which is smaller (80 m2 and 0.9 m high like the first bed). This “cascade” filtration, which works without any external energy but just bygravity, is completely independent and totally ecological.

This WWTP, and in particular the two basins, were planted with reeds from the edge of the Pangalanescanal. They have a twofold function: first of all to absorb waste water and a good proportion of bacteria for their own growth, and secondly they perform a mechanical function in that the reeds, as they sway in the wind, move their roots, which prevents gravel getting clogged up in them.

ALEHSAM blog: alehsam.com – ATAHSAM blog (Touraine Association for Aid to the St Anne Hospital in Madagascar): atahsam.over-blog.com – Electricians Without Borders: electriciens-sans-frontières.org – These sites invite readers to sign up for their newsletters. 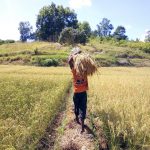 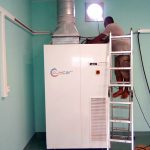 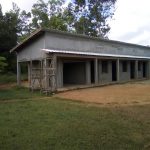 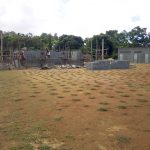