In last summer’s magazine article (MEP Review No 572), Father Nicolas de Francqueville, MEP, interviewed two of his parishioners, Joseph and Catherine, a young couple who had at that time decided to leave Hong Kong to live in the United Kingdom. A year has passed. He is telling us their news. Dear brothers and sisters in Christ, I am Joseph. Last year I shared with you the reasons for my plan to emigrate to the United Kingdom with my wife and our four cats. Now I am living in Warrington, in England, where I have been since the end of January. Fr Fan (Nicolas) invited me to share with you how this change in my life unfolded.

Last year was the craziest year of my life. On the recommendation of an intermediary company that I had never met, I negotiated the construction of a house with a local British company. The entire purchasing process was carried out solely via online meetings on the internet. At that time, the house that we had bought had not yet been built, it was just a concrete base. I was both worried and excited. I was worried that the builder might not build the house as promised or might put the project on hold, but I was also eager to experience my new living environment. After I paid the deposit and for the next two months, the builder did not provide any updates about the building, and I was very anxious. Finally, around June, the builder sent me the official sales contract together with photos of how the construction work was progressing, and I breathed a sigh of relief. Then I started to take the necessary steps to obtain a visa from the British government, to obtain an entry permit for our cats, and to start sending boxes of our belongings, etc. Once all these steps had been completed, I resigned from the school where I was a teacher. Due to the epidemic, the flight was cancelled and changed several times. Finally, we left at the end of January. It was only once I was on the plane that I really felt that my new life was beginning.

Arrival and first contacts with the Church

The day after we arrived in the United Kingdom was a Sunday and, together with my wife, we went for Mass to a church recommended by a friend. That was the first day that we spent together in the United Kingdom and it was also the first time in our lives that we took part in the liturgy in Latin. As I don’t understand Latin, I could only observe the ritual of the Mass with my eyes, and feel God’s presence in my heart. The sacrament in Latin is just another method to come into contact with God. Although I do not understand the content, I am able to feel the devotion of the congregation and the officiant to the Lord. But, as we do not know Latin, the following Sunday we went to another English church in the same parish to attend Mass. Guided by the Holy Spirit, we met a group of faithful from Hong Kong. The English parish priest takes great care of the Catholics from Hong Kong who have moved to England.

He also invited the Auxiliary Bishop from the Diocese of Liverpool to come to the parish in order to celebrate a special Mass for all the new faithful who originated from Hong Kong. After Mass, the bishop chatted to us to better understand our situation and our pastoral needs. This bishop, Mgr Tom Neylon, has even been officially designated by the Catholic Bishops Conference of England to provide pastoral care for all the Catholics from Hong Kong who are emigrating to England.

Looking back over the past few years, I feel I have been guided by the Lord in so many little ways: from the decision to move to the purchase of a property, from the management of the remote construction to theactual journey and finally to our arrival, everything was guided by the Holy Spirit. The biggest challenge right now is the weekly Mass. Due to my language limitations, I cannot fully grasp the preaching of the priest. I pray that under the guidance of the Holy Spirit, I will be able to master English as soon as possible.

Hong Kong networks and becoming part of the local Church

In my town of Warrington, I have met many Hong Kong faithful who have recently moved to England, most of whom do not yet have jobs. They mainly look after issues relating to the move to the UK as well as their children. Every Sunday, Mass is an opportunity to meet up; we have lunch together and get to know each other better. During the week, when the children are at school, we sometimes meet to discuss life issues, to share our faith, pray together, etc. The local parish takes care of our needs, the only challenge being the language. We have also started organizing various charitable activities as well as participating in existing charitable work to serve the parish. The parishioners are older and we Catholics from Hong Kong all know that we must first serve the parish and then help local associations to relieve the pressure on parishioners. On the first Saturday of each month, the parish deacon will be organising a breakfast for men. The aim is to bring together a group of parishioners so that they get to know each other and communicate with each other. It is hoped that this group will, in the future, take responsibility for the general upkeep of the church. For my part, after having been a high school teacher in Hong Kong, I am now training to be a plumber because it’s a trade where it is easy to find work.

Finally, I also pray that the Father sends the Holy Spirit to bless Hong Kong, so that the region can soonreturn to its original political system and that everyone can live in peace again. May God protect you! 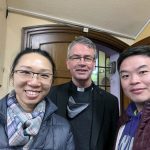 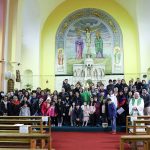