When we think of evangelisation, funerals are not the first thing that comes to mind. However, in the three years that Father Nicolas de Francqueville has been accompanying catechumens in his parish, a significant number of them have been baptised following the funeral of a loved one.

About 15% of the inhabitants of Hong Kong are Christian, half Catholic and the other half Protestant, of all denominations. The majority of the population describe themselves as being without a religion, but have a background of Taoist Chinese culture when it comes to asking for favours from heaven, for example at the New Year or during funeral rituals. These funerals, in the Taoist rite, are generally very expensive, and include paying for monks to recite prayers, as well as the manufacture, in wood or paper, of a whole range of objects used in daily life (house, car, boat, clothing , food, 燒紙 tickets, etc.), which will then be burned to transport them to the other side of death so that the deceased does not lack anything in the other world. There is also the rite of 破 地獄, the opening of the gates of hell, supported by the playing of cymbals and trumpets. In contrast, the Catholic funeral ritual is sober and peaceful with readings that invite meditation on the love of God, faith in Jesus Christ, and the hope of the resurrection of the dead.

Often, a good part of the family members or friends of the deceased have not been baptised but are touched by the simplicity of the ritual and the words of hope that they hear.

Our parish funeral team comprises about 50 people. These volunteers include at least ten to travel to each funeral celebration, to recite the rosary before the start of the ceremony, to support the priest during the liturgy, and to travel on the coach to the crematorium for the final prayers before cremation. It is very touching to non-Christians that people give their time for free to pray for a deceased person they do not know. It is not the custom here. In Chinese culture, even talking about death 死 is taboo. This is why the number 4, which sounds similar to the word for death (just one tone away), is banned from many places. When travelling in lifts in Hong Kong skyscrapers, floors 4, 14, 24, 34, etc. do not exist!

After the funeral, we are often invited by family members to have a meal at a restaurant with them and this is a good opportunity to get to know them better; also, for those who are not Christians, it is an opportunity to meet a priest and talk about spiritual matters and, for those family members who are already baptised, to be able to witness to their faith in a positive way.

In this way, after funerals, we regularly receive requests from family members wishing to enter the catechumenate. This was the case with Sophie, a young mother whom I accompany every week to the Tuesday evening catechumenate meeting and who was baptised with her three children and seventy other catechumens at Easter. 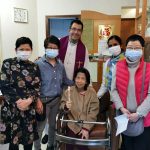 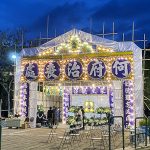 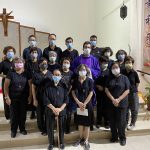 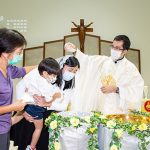