Under the aegis of a government programme and working together with local monks and an American NGO, Father Will Conquer has become involved in the preservation of Prey Lang jungle. A great example of interdenominational cooperation to save the environment. Right from the early days of its presence in Cambodia, the Catholic Church has been concerned for the welfare of the Khmer people. Some individuals, such as Mgr Jean-Claude Miche, have been able to help the Khmer people with diplomatic assistance while others, more recently, like Father François Ponchaud or Mgr Enrique Figaredo, have been involved in struggles for justice and peace to help the Cambodian people survive the tragic events in their history. This work of the Catholic Church in Cambodia is continuing today. In 1997, Catholic missionary Sister Denise received the Nobel Prize for campaigning against the use of anti-personnel land mines, which destroyed so many lives in Cambodia. The world has changed, and so has Cambodia. While we can be grateful for the peace that exists now in Cambodia, we cannot be indifferent to the ecological crisis which is not only imminent but already upon us. ‘There is nothing in this world that is indifferent to us’ (Laudato Si’, 2). Cambodia is truly a wonder of nature. I have admired its natural beauty since I arrived here nearly three years ago. But, like many others, I am concerned for the future of this beautiful environment. This beauty and its fragility are gathered in a location that has become a contentious issue for the entire country. Prey Lang is the last major lowland rainforest on the South east Asian continent. The forest covers about 5,000 square kilometres and is located west of the Mekong River in the northern part of Cambodia. It is home to 250,000 inhabitants, many of whom belong to the indigenous Kuy people of Cambodia, as well as to many endangered animal and plant species.

A green area now under threat

What can we do to maintain the beauty of the environment and to protect natural resources for the benefit of all Cambodians? For several years now, Jesuit missionaries, and in particular Father Gaby from the Philippines, have been involved in the creation of a community network, the Prey Lang Community Network, to help indigenous populations protect themselves against the dangers of deforestation. This kind of commitment is not without its consequences in Cambodia. Alejandro Gonzalez-Davidson, a young ecologist from the ‘Mother Nature’ NGO, was convicted, in absentia, for his enthusiastic commitment in favour of the forests of Cambodia and became persona non grata in the Kingdom. Committing to such a cause is not without risk in Cambodia.

Some people sneer at Cambodians, saying that they do not care about their environment. In fact, the model of life in Cambodia, as an inevitable consequence of poverty, together with an attachment to simple village life, reveals the ‘happy sobriety’ that was later rediscovered by great minds of the West such as Pierre Rabhi in peasant wisdom as well as in the sustainable and self-sufficient agriculture and the unadorned ordinariness of monastic life. However, pollution, plastic waste and deforestation have had a negative impact on our environment here too. In the spirit of Laudato si’, the Catholic Church has worked for many years to improve the situation. We have a role to play in this transformation, and being invited to participate in this information campaign was an opportunity for me to start on this mission.

On September 28 and 29, 2020, the United States Agency for International Development  (USAID) and the Ministry of the Environment invited us, together with Cambodian monks and young influencers, to participate in this information campaign . We were able to see the wildlife protection activities carried out by the rangers of the Prey Lang Sanctuary. The campaign aimed to promote protection of the forests, biodiversity conservation and resource management. The Venerable Kou Sopheap, the true spiritual master of Cambodia, with four million likes on Facebook (in a total population of sixteen million), accompanied us together with other monks from his entourage. The Ministry of the Environment, in collaboration with USAID, young influencers from Cambodia, monks and a priest: we were all different but came together to protect Prey Lang. For me, it was a wonderful experience. I had not expected to be camping in the Cambodian jungle. I had not expected to laugh in the rain with all those monks. I had not expected to be sitting down with them to discuss the meaning of life. Is this the fraternity and dialogue that Pope Francis wrote to us about in Fratelli tutti? I believe it is.

Why would the organizers want to invite clerics like Kou Sopheap and me? Of course, Kou Sopheap is a celebrity. But why would Sopheap want to share photos of the two of us at this event aimed at protecting theenvironment? Why did 60,000 people like this photo on Facebook? Religion undoubtedly has a role to play in speaking about environmental protection. And, saying it together, this makes the message more powerful, even if the motivations may be different. The Venerable Kou Sopheap said, during one of our exchanges: ‘When there is a lot of forest, it is cooler. In the Buddhist era, the Buddha was born in the forest, Enlightenment came in the forest, Nirvana took place in the forest too, and when the Buddha instructed monks, he brought them into the forest, for the forest is a natural and beautiful environment that helps calm both mind and body.’ I totally agree. And I respond, as a Christian: ‘I believe in the gospel of Creation. God did not create us to live in fear, whether fear of hell or of climate change, but for eternal happiness. Love must be the primary driving force for ecological conversion, a love that comes from gratitude for God the Creator who gave us the earth to share. For Kou Sopheap, to love the Earth is to love yourself. Just as the people of Pailin have been victims of the worst malaria epidemics following decades of deforestation and mining, so we must realise that in order to protect ourselves, we have to protect our environment. Let’s protect each other, is how I wanted to respond to him.

The information campaign launched by the American Embassy was closed down, for various reasons. The threat to Prey Lang is still there. Was all this just a vast green-washing communications operation by the networks? It may have been for some, but for us two, definitely not. Our exchanges and our friendship continue. Recently, on the occasion of a visit to his pagoda, south of Phnom Penh, we went together to meet young people, taking advantage of the cool shade of trees planted by monks in order to encourage them to take care of this beautiful environment. Our exchanges will continue, with the hope of going to Rome together soon, and to Assisi, by the grace of God. Yesterday’s missionaries were botanists. Father Jean-François Soulié, who gave his name to several plants, was an MEP priest and missionary in the nineteenth century. Like St Francis of Assisi, he loved nature. He was protecting the environment before this became fashionable. His botanical mission provided opportunities and pretexts for privileged contacts with the local population and with the scientific community. May he be an example for us! In the nineteenth century some missionaries were botanists. In the twenty-first century, new missionaries could be ecologists. 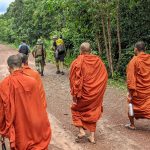 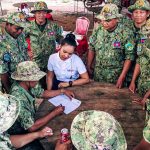 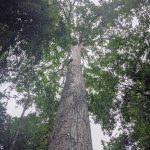 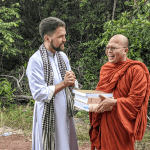