Include the voices of the poor and the young


Ana Palma, 52, is a missionary from the community of the Servants of the Gospel of God’s Mercy. Originally from Spain, she has been living in the Lingayen-Dagupan diocese in the Pangasinan region of the Philippines, for six years. She describes the experiences of her community following the announcement of the preparation of a synod on synodality in the Church which is to take place in October 2023 with the theme: ‘For a synodal Church: communion, participation and mission’. In September 2021, our bishop Mgr Socrates B. Villegas, put together a small team of thirteen people in which I am the only woman.

He chose priests or deacons representing the nine deaneries, a layman to represent Catholic schools, a young person and two vicars. I felt unworthy to be on this team, but at the same time I was very happy to be able to prepare for the synod of 2023 in our diocese. We are living through historic times in the Catholic Church; it is the first time that a Pope has prepared a synod in this way. The direction is from the base upwards – if we can use this image – from the people of God to the bishops, and not the other way round. The preparatory document clearly reflects the Pope’s desire to listen to all the people, not just Christians or those who are already actively working in the Church, but everyone. He has asked us to have an ‘outgoing attitude’, to really listen to everyone and to gather responses from all social sectors. Following this listeningprocess, an Instrumentum laboris will be developed for the synod. After the synod, decisions will be takenregarding programmes and specific steps for the future. Encounter, listen and discern, these three verbs run through the whole synodal process.

Due to the pandemic, we have been holding all our meetings on Zoom. This was a new challenge and I wondered how could we create a spirit of listening, dialogue and participation all online? Would this be possible? But since the Holy Spirit knows no bounds and is greater than anything, it turned out that it waspossible! Together, we developed a presentation video and a Power point for the diocese to help priests explain the synodal approach in their parishes. We also prepared a guide with the principal questions that the Pope gave us as well as basic materials. I was asked to organise and make presentations to the nuns and consecrated persons in our diocese. There was a very warm welcome and a great desire to participate. In our diocese there are two convents of contemplative nuns, one of Poor Clares and the other of Carmelites. I personally went to meet them to share with them the Pope’s desire to listen to all people and that they, according to their own spiritual gifts and vocation, may also respond and bring their vision. Together with a Dominican sister I also went to visit the Missionaries of Charity who do not have a mobilephone but only a landline. We gave them questionnaires and  they submitted their answers to the bishopric.

This whole process required us to change. Some priests were surprised that the surveys were all about listening and collecting responses. We had to educate the parish priests so that when summarizing responses they did not summarize or collect only the ‘right’ answers or those that would be most in agreement with the Church. We had to explain that there is no right or wrong answer, that everything is fine, since we are as yet simply at the listening stage and all opinions need to be collected.

In this context, our local Church still needs to be more inclusive of the voices of the poor, of the many groups who are excluded, people of other religions and women, etc. For some religious congregations, it came as a surprise that the Pope wanted to listen to them and as for some priests, they had to go to meet people who were the most distant to listen to what they thought of the Church.

Lay people and the young

In our pastoral zone (pastoral area that is part of a large parish), we have also followed the path of the synod with both lay people and the young. One Sunday after mass, we invited anyone who wanted to do so toremain in the chapel. A lady who is involved in the parish and who has been undergoing training in our community explained to them the spirit of the synod and the possibility of participating in it. Then the young people, working in groups, also answered the questionnaire according to their own understanding.

The laity have been divided into different groups in order to be able to reach all possible sectors: workers in the fields, drivers of tricycles, those who work in the markets, women at home, people professing other religions, office workers, etc. We were asked for a minimum number of participants per parish so that all sectors of society could be represented.

The experience in our community

Each religious community was invited to answer the questionnaire. In our own community, there are four missionaries, two Portuguese and two Spanish. We spent two afternoons responding together. For the process to be synodal, we first prayed for answers individually before sharing them. We each answered all the questions, and even if there were different opinions, all responses or points of view should be taken into account. It was very enriching and required us to listen deeply and respect each other’s opinions. Working with all the congregations in the diocese, we created a team of encoders, i.e. three nuns who entered all theresponses in an Excel document. Using this document, I undertook to make a summary of all the communities’ responses to send it to the bishop.

We wanted to make use of this whole process for our own diocese too. As a result of collecting all the answers from each deanery, from schools and from all the religious, this gave us a very good panoramic vision regarding pastoral work within the diocese.

I would also like to share some experiences concerning the spirit of the synod, which means ‘walking together, discerning together and carrying out the mission together’. Filipino culture is a very communal culture; in it the sense of ‘going together’, of ‘doing things together’ is implicit. What is surprising is to go somewhere alone – Filipinos cannot understand this. Even today, more than six years after my arrival here, when I go to buy bread at the market, people ask me: ‘Did you come alone? And your friend, where is she?’

At Christmas, we had some beautiful missionary experiences with young people. One of these missions took place in a rather poor area, where we wanted to convey the message of the birth of Jesus to children. Afterwards, we played games, and the party ended with a merienda (a Filipino tea party) and we gave each child a pair of flip flops. It is thanks to the generosity of different families that we were able to offer the merienda and the gifts. The other mission was an initiative of the young people themselves who wanted to share their own clothes. One afternoon, on the Facebook chat that we have, they wrote this message: ‘Anyone who would like to donate some clothing, please bring it to the parish hall’. That same afternoon, lots of clothes were dropped off, they sorted them and divided them into small bags. On the afternoon of December 24, they went to the centre of town to share them with people on the street. The young people were happy to have contributed something of their own and to have been able to be instruments of God’s love. They ‘had been Christmas’ for others. This is what I can share, the humble experience of living our mission in an ‘attitude of synodality’. 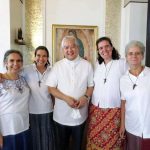 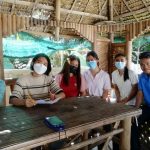 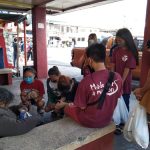 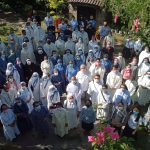 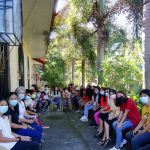 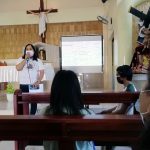