Father François-Xavier Haure recently celebrated the funerals of two persons, both 96 years old. Those could be called full lives! One was a Mr Matsui, from Kutchan, and the other Mr Idoï, from Otaru. Here is their story. One of them was baptised Anthony, and the other Francis-Xavier. Born to Christian families, they were both baptised as children. They could have been friends at school or work colleagues. Their respective families could have been friends – who knows? The only thing was, Kutchan and Otaru are separated by hills and valleys and, at the time of their childhood, it seems unlikely that they had an opportunity to meet. As for me, I had to cross these mountains in my red car, keeping my foot on the gas in order to arrive on time for the start of the ceremonies. In my imagination, I went for a walk in the Kuril islands. They make up the archipelago that forms a garland of islands between Hokkaido and Kamchatka. In Japanese, they are also called Chitto Retto, the archipelago of a thousand islands. I don’t know the meaning of Kuril, but the Russian influence there is very noticeable! In the far north, just before arriving on the continental mainland, and standing on the Kamchatka peninsula, lies this little oval island called Shumushuto in Japanese. It is insignificant. You might well wonder what got into Mr Idoï’s head to go and die there. It’s Russia. He’s Japanese. Organising the repatriation of his remains to celebrate his funeral in Japan was no easy matter. It took some time. He went there with some cronies, without a passport and with questionable motives. Diplomatic problems ensued. The Russians were put out. They needed time to get over their anger and to begin to cooperate. The local authorities, by the way, did not want to do anything about him for a long time; they acted with the disdain of a person who considers himself in the right, having caught someone with their fingers in the till. As regards Russo-Japanese relations, tempers are always frayed and any event provides grounds for the perpetual friction between the two Far Eastern neighbours.

In short, as regards these two, first of all things had to calm down. You don’t have to go too far back in their shared history to understand the issues. Let’s start with the end of the Second World War. The Potsdam conference ultimatum to Japan demanding its surrender was, in the end, unacceptable because it required the unconditional abdication of the emperor. Some historians even think that this clause was drafted deliberately to make it unacceptable. The refusal was then used to justify the deployment of atomic weapons and to show American superiority over the Soviets.

In the Cairo conference the idea was that the Soviet Union would join the war against Japan in order to justify a partition, as was the case with Korea. Obviously, the Americans did everything they could to torpedo this possibility, hence the demonstration of nuclear power. It was this that established American domination over Japan, to the detriment of Stalin’s plans for that country.

It is against this historical background that Japan’s last stand took place, fuelled by Stalin’s anger. Stalin declared war on Japan on August 8, in between the two atomic bombs, in order to be able to invade as far as possible from the north, and Japan deployed its last remaining forces to prevent this happening.

Meanwhile, on August 15, Emperor Hirohito announced the surrender of Japan as fighting was continuing between the Soviets and the Japanese on the Kuril Islands. Six hundred Japanese soldiers in their prime were killed after the end of the war near Kamchatka to appease Stalin’s anger about this area of the Far East. Four Japanese islands, east of Hokkaido, were conquered by the Soviets. Japan is still asking for them to be returned, and to this day this dispute poisons Russo-Japanese relations.

Mr Idoï, whose funeral at the age of 96 I celebrated, is not just from the generation of those young men who fought against Stalin’s troops on the Kuril Islands, but was himself one of the combatants. It is a page of history that, for us, is now closing. All the politicians of that era are dead. The Soviets in Russia became Russians again. And Japan is a peaceful country.

The battle of Shumushoto Island

Originally from Otaru, he had gone to study at the Sophia Christian University in Tokyo. His family had great hopes for him, he was very gifted. After being mobilized to fight Stalin’s troops in the far north of the Kuril Islands, he was one of the six hundred Japanese fatalities. He was killed by Stalin’s artillery at the age of 25 on Shumushuto Island on August 18, 1945, three days after peace had been declared. His mother, who always hoped for his return, died in 1947. Three of his eight siblings also died without knowing what had happened to him, even though everyone knew he had died in battle. It is only very recently that excavations  led to the discovery of remains of some 40 Japanese combatants on the island. They found his wooden seal, on which his name, Idoï, can still be deciphered today. This guided DNA researchers to start work on confirming his identity. That is how the Japanese authorities came to contact his siblings in 2015 to inform them of the possible discovery of the body of their older brother, who had been missing for seventy years.What a surprise this must have been for them! Without a conclusion as regards the tragic end of their brother, still they had been aware of this unanswered question.

It was with both apprehension and hope that they came forward for the DNA tests as part of the investigation. The results were positive! Their elder brother’s remains had been found. His remains were finally returned to his grieving family in October 2016, seventy-one years after his death. There followed several private and also official ceremonies to commemorate the sacrifice of a young Japanese man fighting to maintain the integrity of his country, and his repatriation to his native land. There was a striking contrast between the memory of the painful history surrounding the mortal remains of a soldier barely out of his teens and his ‘return’ to his family decades later, in a peaceful Japan.

Antoine Matsui, from Kutchan, left his life here on earth after having lived it to the full. His family were very appreciative of his long life. His contemporary, Francis-Xavier Idoï, of Otaru, had his life stolen from him at the age of 25 in the most incomprehensible of ways. While a student at Sophia University in Tokyo on the eve of graduation, he had composed a line for his class album. His younger sister, Madame Idoi Aï, translated it as follows: ‘Wherever I am sent, I am ready to seek peace on Earth!’ Paradoxically fulfilling this line, one can recognize that Francis-Xavier offered his life so that his country did not fall irreparably into obscurity. His sacrifice allowed Anthony, by dint of his daily labour throughout his life, to build a renewed, peaceful Japan. They both built the Japan of today.

The funeral of Francis-Xavier Idoï in Tomioka Church in Otaru was full of dignity and emotion. His five brothers and sisters who were present experienced a mixture of joy at the rediscovery of their elder brother and relief at the positive conclusion of a tragic event from long ago. Supported by profound faith in the resurrection, they bore witness to the hope that their older brother himself carried and they brought all the people present at the celebration with them along this path of hope. The congregation included official authorities, the media in all its forms, and Christians from Otaru parish and surrounding areas. I will not forget the deep emotion of one other man present on the day, also 96, who had been one of his friends from primary school.

These words rose in the heart, filled with the emotion of all these people who came to pay their final respects. The words may seem banal but they are so rich in meaning in the circumstances: ‘お 帰 り な さ い!’ ‘(O Kaerinasai!)’ Welcome home! After these long years in exile, this long Passover, this long journey, he is finally back home. From a Christian perspective, Christ himself calls out to each of us with the same greeting. When the hour comes, when, by the grace of God, we pass from this shore to the other, when the moment of the resurrection steps into our life, Christ himself invites us to return home by welcoming us with this wonderful greeting. I like to think that the funeral liturgy shows us here what Christ does for those who come to the threshold of the eternal home. ‘Francis-Xavier Idoï Shige-Ichi, welcome home!’ 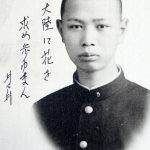 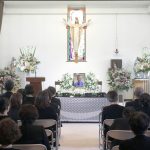 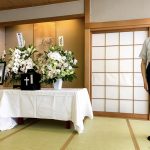 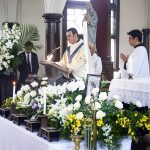 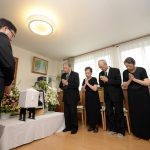 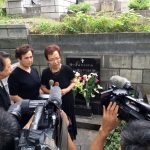