Learning Through Playing : an Appealing Approach…


The nursery school of the Kong Noye parish has just finished its second school year. There are many projects, even more so now that more and more young parents take an interest in the education of their children. 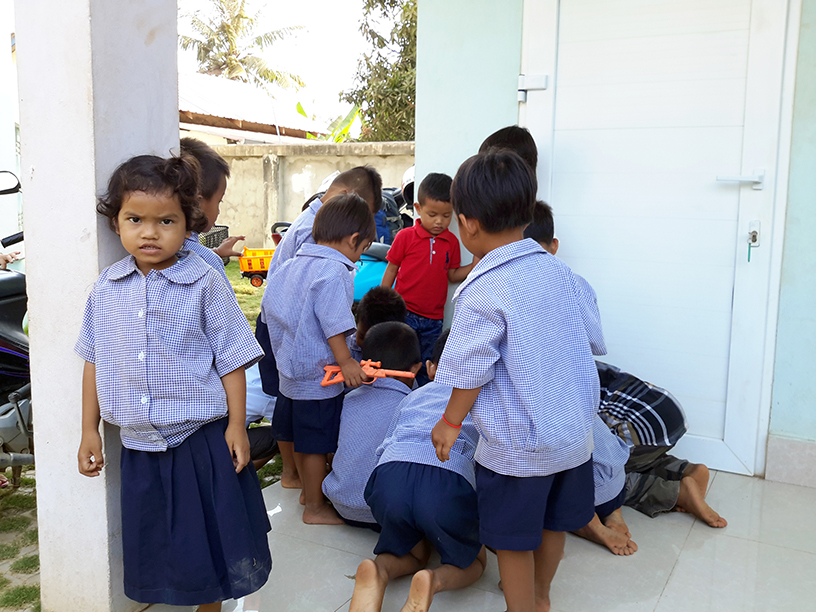 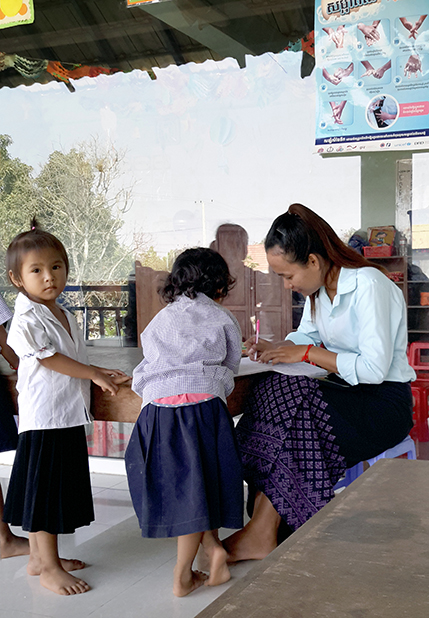 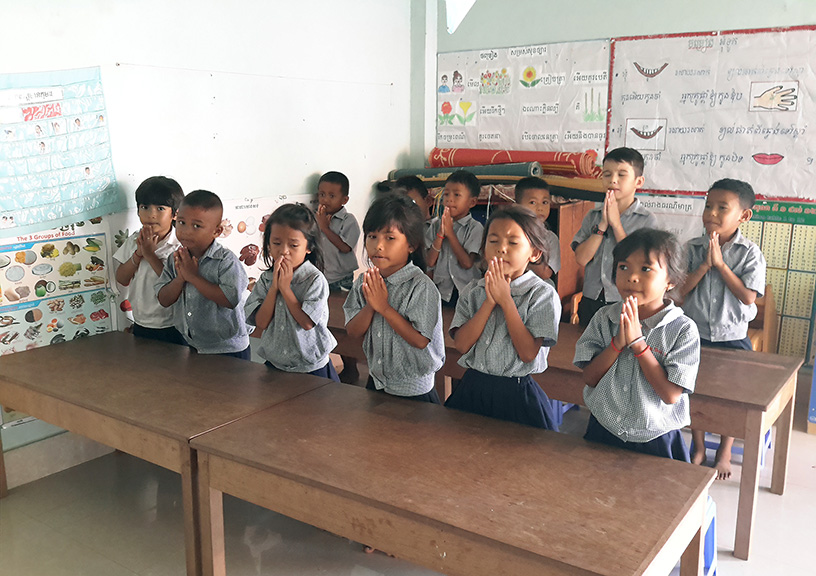 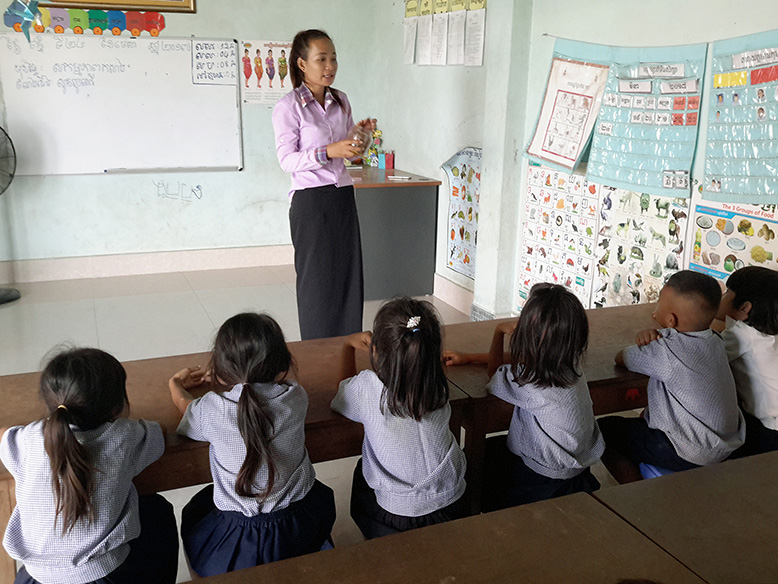 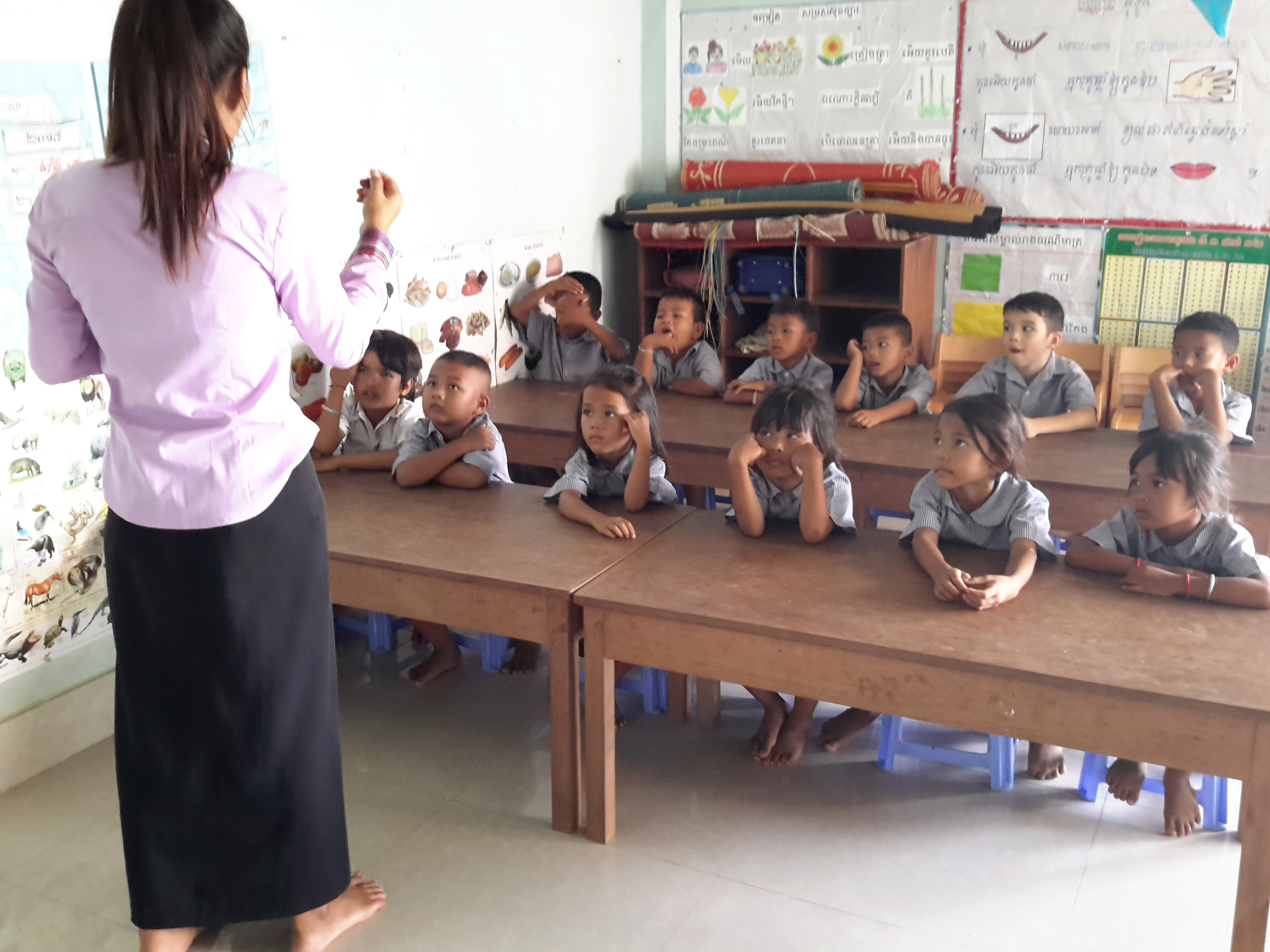 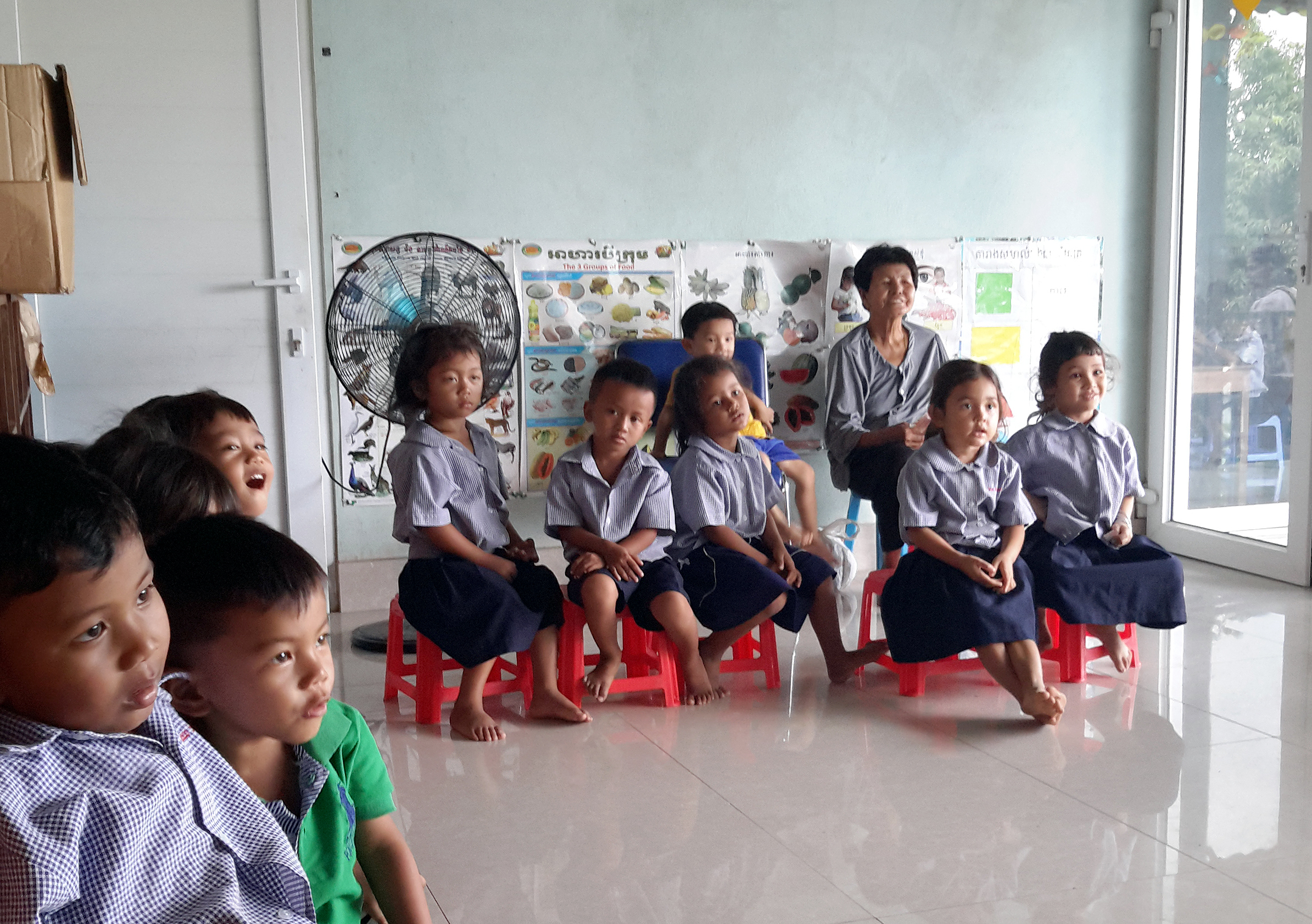 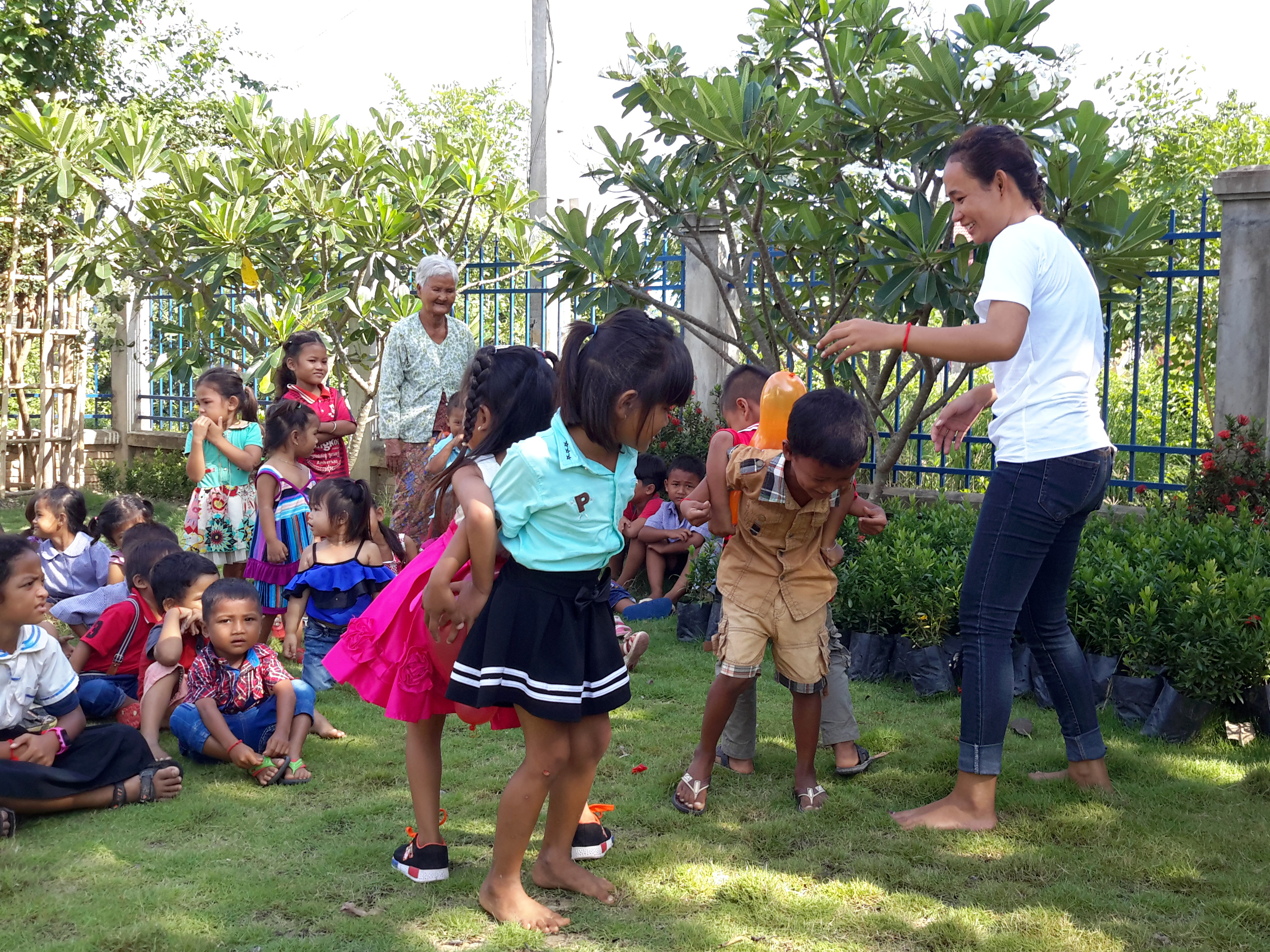 The staff of our nursery school, composed of one director and two teachers, now has more reassurance in their relation with the children and their parents. This year, during the last day of the school year, the parents, brothers and sisters of the students were invited to the school. The older children received their diploma for their end of cycle at the nursery school. I was impressed by the sustained attention of the students : staying seated and silent during the whole meeting and speeches of each member of the teaching staff. In a single year, the little ones learned to sit and listen to the teacher. They learned to sing, dance, play, and even more. The older ones were scattered but just as attentive. If, during the first year, in 2016, the mothers and grand-mothers came in number, numerours fathers also made their appearance.

The presence of the fathers was a new and significant factor for us. It meant that the young parents, even the poorer ones, took the education of their childen seriously.

The social context of our neighborhood

Our school is located on the very edge of the city of Phnom Penh. We are situated in the industrial part of the developmental plan of the city. The majority of the families living there were peasants who sold their land and are very indebted. They have become factory workers and, with alot of overtime, have a salary of over $200 per month.

Until now, the education of the children was not a priority in these families. And the girls, upon reaching 15 years of age, were taken from the schools and sent to work in the factories or construction sites, without a care for their level of education. They just needed to make an identity card and borrow the residence booklet of a neighboring family having children over 18 years of age to facilitate the hiring at the factory with the required legal age. Between the salary of the parents and that of the children, they all contributed to pay for the debts, which had exorbitant interest rates. In addition, these families, due to their poor level of schooling, do not know how to manage a budget, and are therefore without money before the end of the month. In addition to the problems related to the borrowing of money, are added gambing, alcoholism, and drugs in the families.

With these conditions, sending children to school and ensuring their attendance is far from easy. Yet, having school the whole day is a security for the parents while they are at work, because the children are not left on their own without the supervision of a responsible adult. Furthermore, it helps the parents to better understand the cost of their children’s scholarship which they pay each month, adding up to $10. Also, the parents who do not want to pay them are those most affected by alcoholism and gambling. They are incapable of managing their budget and ensuring the education of their children.

In the cities of Cambodia, and in Phnom Penh in particular, the families pay attention to their children’s schooling. Parents from large families don’t want to have alot of children for economic reasons and for the viability of their family in the city. Education and decent housing are the most important objectives for young couples. They do not want to live in the same conditions as their parents in the city or in the countryside. They form the middle class but with varying differences according to the category of their job and the level of their education.

Teaching at the nursery school of Kong Noye

It is in a rapidly changing cambodian society that the nursery school of Kong Noye welcomes its students.

Our two teachers have left their jobs at the factory to come and teach at the nursery school. One had the education level of a tenth grader and the other the level of a twelfth grader. The director, because of the civil war, had studied only until the ninth grade. This did not prevent them from obtaining their diploma of nursery school teaching, with good results. The children respect them because they know how to teach with calmness and authority. Most of them have the support of their parents. They are better prepared to discover and assimilate life in  society and at school. At school they learn to learn, so to speak. It is asked of the teaching staff to visit the parents and families to better see their living conditions and understand the behavior of the students in class.

The syllabus followed by the nursery school is published by the pedagogic service of nursery schools of the ministry of national education. The creation of this syllabus requires a close collaboration between the director and the teachers. The director helps the teachers prepare the lessons. Together, they create the documents and teaching tools they need. In this type of teaching, the parents play an important role in ensuring that the child has an emotionally stable family life. In these conditions, the children can fully profit from the lessons learned at school. Day after day, the parents are active players in the intellectual growth and socialization of their children.

There exists different pedagogic approaches to teach children. Currently in Cambodia, the one most talked about is the Montessori method. It teaches children to be autonomous and capable of learning on their own. The cambodian government wishes to use this method in all the public nursery schools, but it is expensive : it requires two teachers per class and specific teaching materials.

The Children and Development NGO and the Krousar Yoeung NGO, from the Network for Development and Care of the Little Childhood in Cambodia proposes an alternative teaching method. It is partly based on the Montessori method but relies mostly on the recent neuroscience studies on the manner of learning of children.

This method is based on the playing of children. The neuroscience researchers realised that, when the child plays, his brain is in a state of hyperactivity. With the help of the senses of sight, hearing, and touch, the brain will allow the child to learn and assimilate large amounts of information. During this period of hyperactivity, also called « enthusisam », the child’s brain multiplies the number of neurons and creates new connections between nerve cells and therefore an increase in the cerebral volume. The child, in this teaching method, chooses the activities that interest him during the time given to him by the method. The presence of adults is not necessary. It is the child who decides what he wishes to do, and with whom. During the three years of nursery school, the child can profit from this method once per week and at home as much as he desires. For the parents, this signifies that they pass from passive witnesses to active participants of their child’s development. Working together with the teaching staff of the nursery school, they will have to take care that the games that their child has at school are available at home as well, so that they can continue playing… The results of the neuroscientific studies show that children who have followed this method, at the end of kindergarten, can read, write and do math operations as if they had just finished their third year of primary school. Furthermore, this study shows that the results are identical for all the children. Learning in a state of enthusiasm allows the brain of any child to learn faster and more easily.

This is the challenge that the teaching staff of Kong Noye will try to meet in the years to come. It is a teaching method which goes hand in hand with the usual teaching method. It is a method that has a cost, but which is more easily established than the Montessori method. Since we are among the first to adopt this path, we will ask for an NGO to sponsor us. And we hope to convince the parents to invest their time in, or rather with, their children. Playing is learning… it is exciting…