Living in a small Japanese village


In France, we talk a lot about the major cities in Japan such as Tokyo, Osaka, Nagoya, etc. but what do we know about the small provincial towns?

Three years ago, after forty years of mission in Tokyo, the bishop told me to take care of four places of worship, in a vast territory of two parishes of Shibukawa and Numata located far away in the great plains of Kantô, in the shadows of the high volcanoes in the central part of Honshu. I live in the church of Shibukawa, a village in full demographic decline but which still maintains a population of approximately 78 000 inhabitants thanks to its fusion with the surrounding towns.

Till 19th century, Shibukawa was a small agglomeration situated at the intersection of two major routes, where the convoys of warriors and merchants coming from the capital stopped before heading north. A legend from the ninth century tells of a warrior passing by who found a rock resembling a navel, which made him think that the spot must be the center of Japan. He created a place of worship dedicated to this rock, which still exists today. Since then, the town took pride in being the center of Japan (even though ten other towns claimed the same thing). In the 19th century, during the industrial boom of the Meiji era, and like many other towns, the factories developed and the hamlet grew suddenly without control. Even today, big rice fields occupy urban spaces, making it difficult to distinguish them from rural areas.

Since two decades, the city center population, where the church is located, is moving to the suburbs. The small businesses are disappearing with the arrival of malls which invade and disfigure the surrounding areas. The commercial streets with closed curtains have become ghost towns. The only important buildings are the hospitals and gigantic game rooms called “pachinko” in Japan, found from north to south, and which are very crowded and noisy in the evenings and on weekends. They are the only leisure centers where the workers go for distraction after a hard day’s work. Cultural centers are non-existent. However, the elderly population finds leisure thanks to a multitude of cultural activities proposed by a large number of “clubs” which are encouraged and aided financially by the municipalities. There are all sorts of activities, such as painting, calligraphy, music, ikebana, tea ceremony, knitting, bowling and croquet, etc. With an annual membership fee, anyone can sign up for whichever activity they wish. Each club is registered at the city hall and managed by a hierarchy of volunteers. The discipline and rules of etiquette are strict, and the agendas of expositions, concerts and general assemblies, are carefully respected. There are also more altruistic associations whose goal is to help children with school, visit the elderly, clean the streets, etc. These clubs and associations are similar to our parishes, where each person is expected to be present and accomplish the required rituals. They are precious because they allow people who are alone to meet others, thereby creating a social bond. For most people, the church is probably considered as just another club to which some eccentrics go.

The bishops have tried to break this club mentality of Christians themselves with no success. How can we make people understand that the church is everyone’s house and that they are all welcome? And how can we prevent the priest himself from being absorbed by the club to be outward and make himself available to others! In my case, the only way might be to join one of the town’s clubs, but I fear being confined to it. For the moment, I try taking a walk every morning in a nearby park and greet the elderly and the young mothers to try to find a bit of human warmth. A greeting, or a reciprocated smile, for me, the stranger in the town who feels quite lonely at times, is like a ray of sunshine which illuminates the whole day.

Nostalgia of returning to my old village

Despite the many associations, more and more people feel lonely and abandoned. In Shibukawa, many elderly people live and die in solitude. It is the case of a resident living in a house close to the church. Several days passed before someone realized that she had died alone in her house. The lack of ties and bearings, due to the dislocation of mutual help structures in the rural community, have left a great emptiness in people’s hearts. Faced with this situation, the municipalities try to enchant people’s lives. In Shibukawa, through a network of loudspeakers, the mayor makes continuous announcements about the weather, accidents, a grandmother who is lost, storm warnings, demonstrations, trying to create a feeling of belonging to a community, which unfortunately no longer exists. In addition, every evening at 6 p.m., the time that work ends and people go home, all the loudspeakers of the town play a well-known and beloved tune of the Japanese, yuyake-koyake, higakurete: “The sky is ablaze, the day ends, the temple’s gong rings, let’s hold hands and go home…”. Composed in 1923 for children, but beloved to all ages, this melody awakens in each one the nostalgia of living together, while expressing the melancholy of a world that is disappearing. Listening to it each evening, I feel immerged, sharing a sense of nostalgia with the people around me.

Each summer, all the little towns light up for the matsuri, the annual three-day festival during which the local gods are paraded in the crowded streets in an atmosphere of celebration. During this occasion, the youth return home to help and participate. The matsuri also exist in each area of Tokyo, but are often reduced to small insignificant marches in a general indifference. Lacking enough participants, the animators have to call on professionals coming from elsewhere. On the other hand, in secluded towns like Shibukawa and Numata, they are celebrated with much liveliness and enthusiasm. They each have their own name. Not surprisingly, the festival of Shibukawa is called the navel festival! During three days, the inhabitants march through the town by area or by profession, doing the navel dance, proudly exhibiting their tummy, and twisting themselves in all manner.

In the last festival, I was able to see the director of the nearby bank, a man who is usually very serious and clothed in a suit and tie, but who was that day like everyone else, parading half-naked and showing off his tummy for all to see, while his female employees were dancing around in mini-skirts and clapping their hands. Located at 30 km from there, the festival of the old town of Numata (45,000 inhabitants), which is under my pastoral charge, is much more impressive and rich in color. The central divinity is the Tengu, a mountain and forest divinity with an abnormally long nose, inspired, they say, from the souvenir of European Jesuit missionaries, who had long noses and arrived in the 16th century. During three days, the town is literally ablaze. At night, tanks coming from all areas converge towards the center in a parade of lights and deafening noise of drums and flutes, played only by young girls, meant to accompany the souls of the dead who, according to popular belief, live in the nearby mountains. The men are perched on top of the tanks with long sticks to lift the telephone lines which are mixed-up above people’s heads in Japan. On top of the tanks are the local divinities of each quarter, with terrifying faces to scare away bad spirits who roam there. It is a great encounter of gods and the living and the dead, and is a great moment of conviviality. The population comes together from everywhere, men in loin cloths guiding the tanks and women in kimonos or traditional costumes. Everything is like a dream and magical, and it is impossible not to share in the collective drunkenness, even without having drunk a drop of sake, which flows in great quantity when it is all over.

During my last participation, I heard behind me the excited voices of two young girls who called me while laughing “Hello shinpusama” (Hello Father). They were two parishioners who worked in the town and came from the Philippines, disguised and dancing like the others: my integration was successful! I was happy to be there, feeling completely welcomed and part of the festival. And I told myself : being in low pace for a few months, shouldn’t my mission begin with this type of immersion? 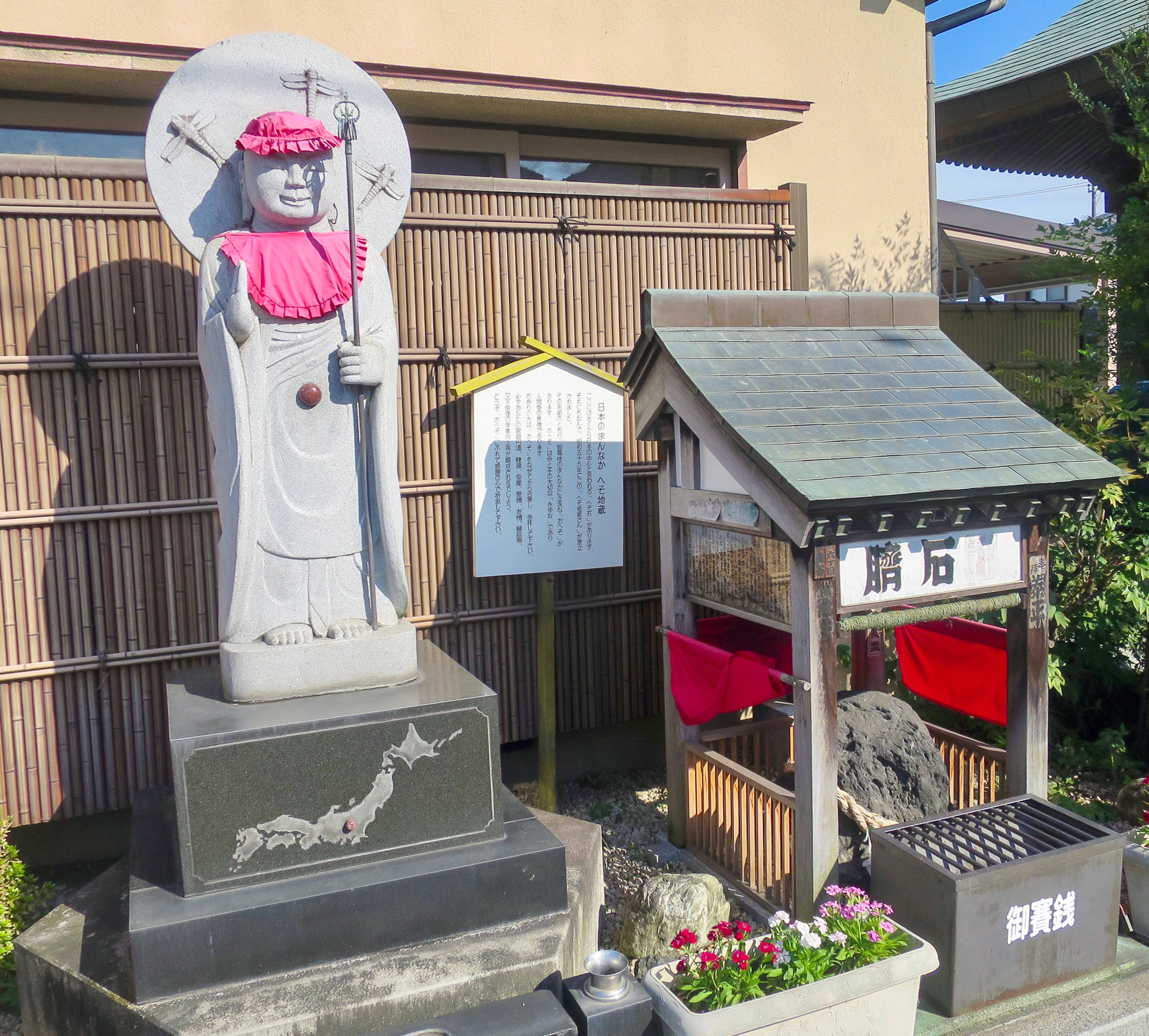 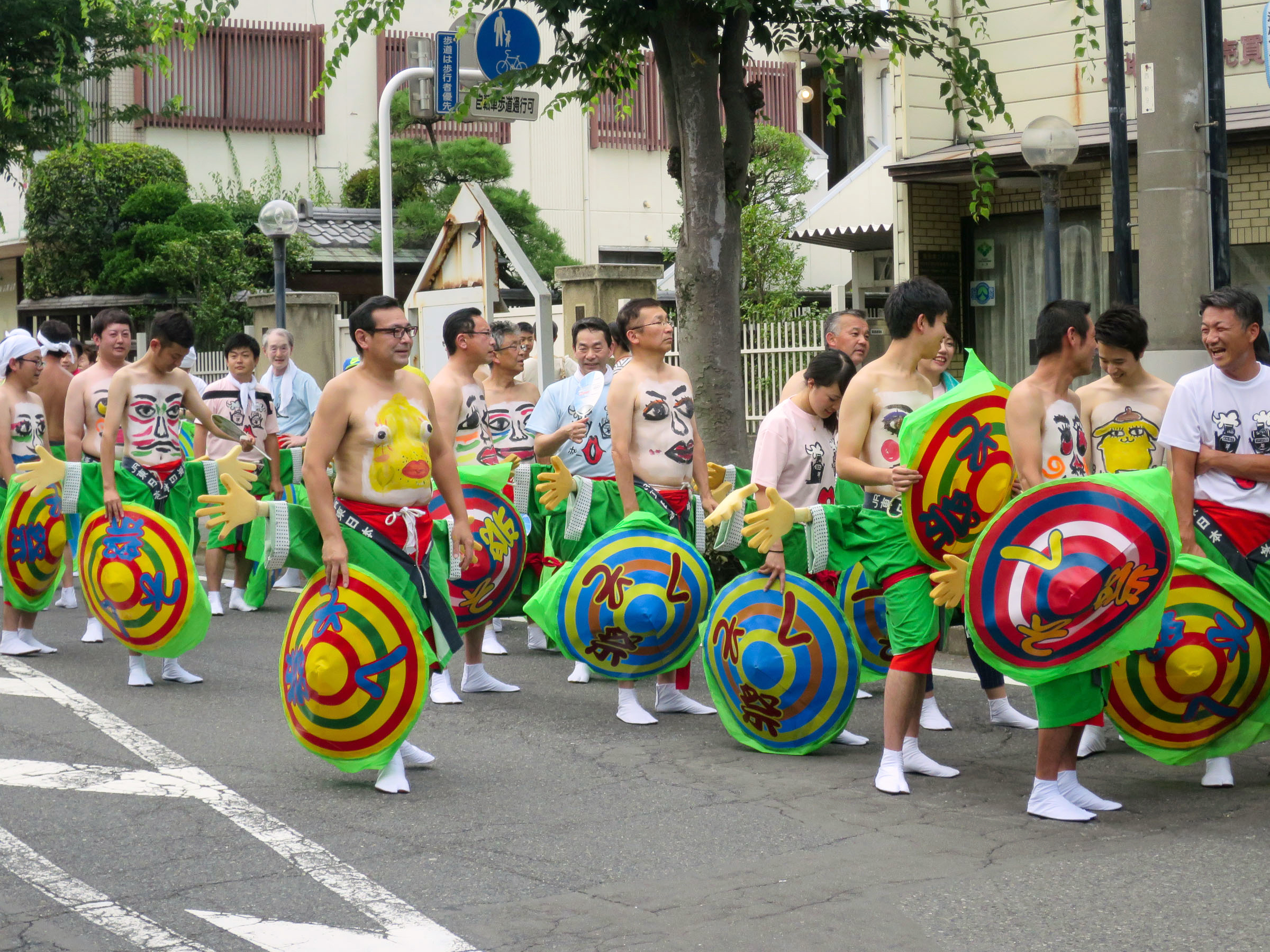 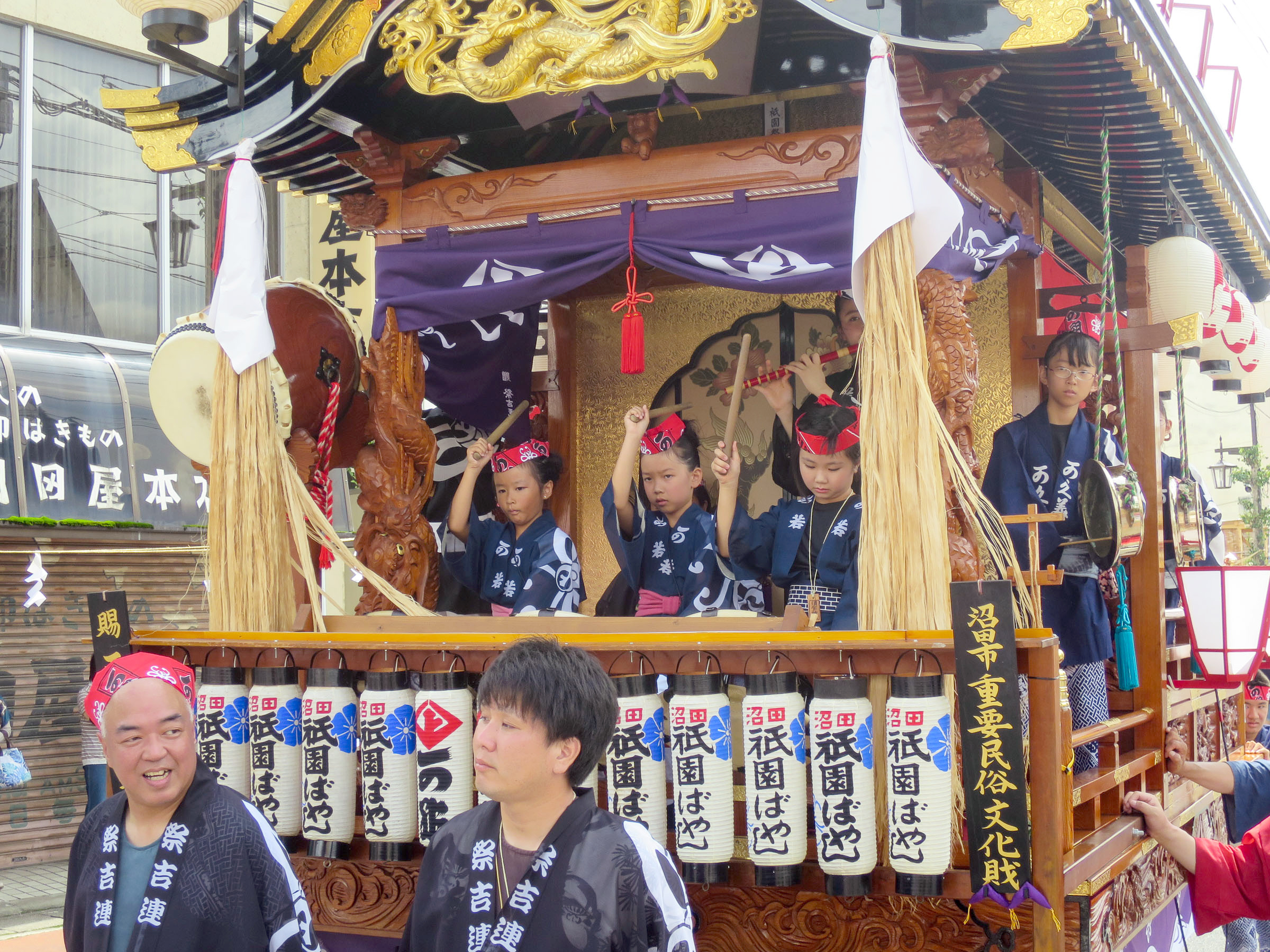 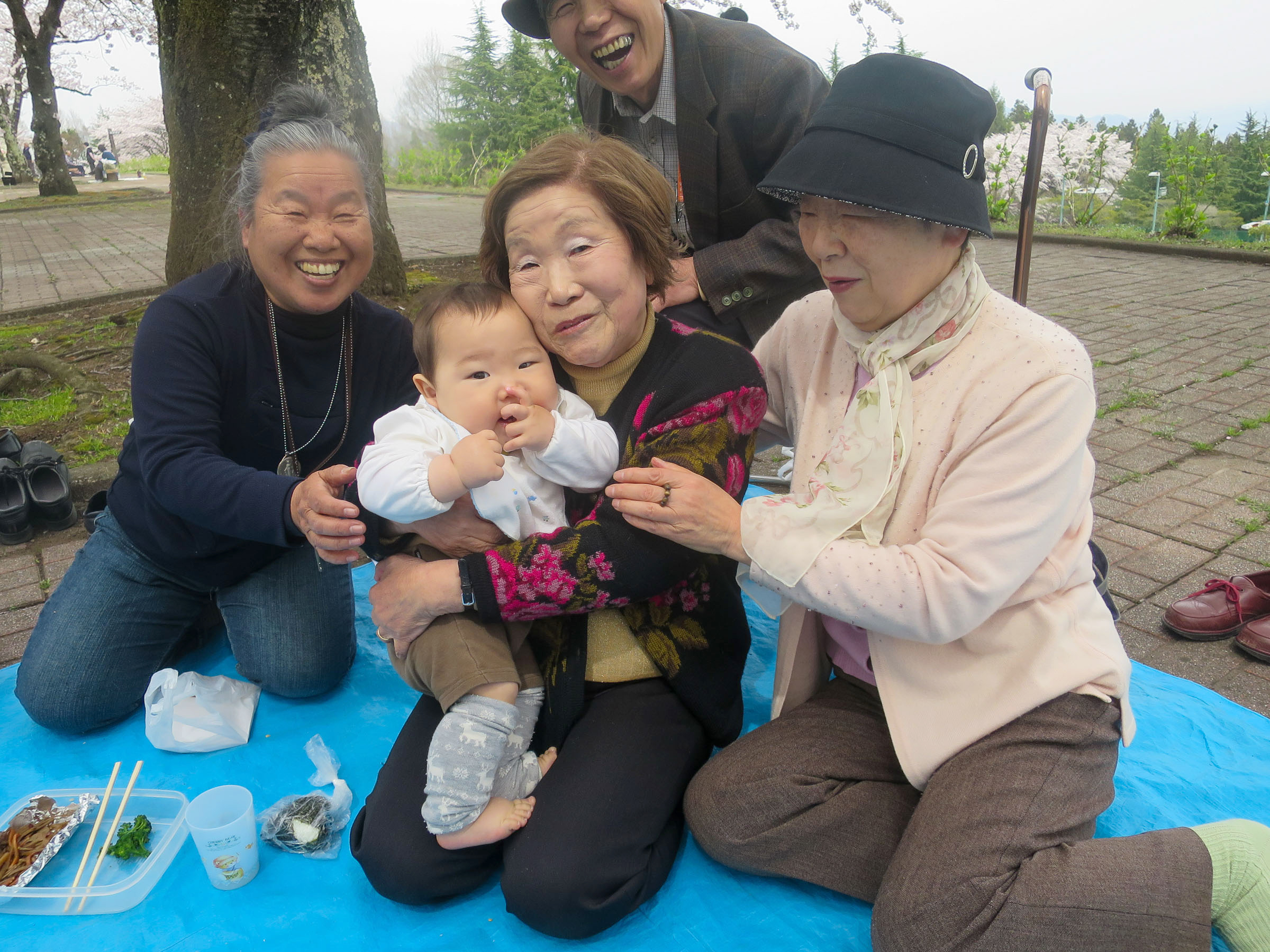