Pottery is an art that is held in very high esteem in Japan. The French are often surprised at the space given to pottery collections in exhibitions or museums. Japanese pottery has different styles and eras, as well as schools and pottery villages. Mashiko, a town in Tochigi-Ken prefecture north of Tokyo, is one of these pottery villages that is famous throughout Japan. After firing, the local soil creates a pottery with a somewhat rustic appearance, quite thick, but with an inimitable reddish-brown grain. Mashiko bowls are highly prized for the tea ceremony.

Firing is traditionally done in a kiln called Noborigama, or ‘climbing oven’. It is a kiln consisting of several chambers placed in steps on the side of a mountain. The firebox is at the bottom and the heat passes from one chamber to the next at temperatures up to 900-1000°C before escaping through the chimney placed at the very top. Stoking the firebox and other intermediate entrances in order to reach this temperature and maintain it for one or even two days  keeps the potter occupied for nearly four or five days and nights in total, including a day for cooling. The passage of the fire marks the pottery depending on its location in the chambers and its exposure to the flames: variations in colour,  more or less shine – especially important for enamelled pottery – light or dark areas, even small deformations that make each piece of pottery unique, original, adding to its value. A kiln is used about three or four times a year.

The earthquake of March 11, 2011 wreaked havoc in Mashiko: all the Noborigama kilns registered on that daywere destroyed. Since then, only about ten kilns have been rebuilt, with the majority of potters preferring to switch to gas or electric kilns.

Mr Tanaka Ki-Ichi is one of those who rebuilt their Noborigama as early as autumn 2011. Mr Tanaka is 66 andfrom Kyoto. He studied art at Aichi Departmental University of the Arts near Nagoya. At the same time, he devoted himself, together with some friends, to experimenting with pottery and amateur kilns. This was his true passion. Working with earth had interested him since childhood. He was introduced by a friend who had recently settled in Mashiko to the man who became his pottery teacher, Mr. Narui Tsuneo. He studied this art with him from 1983. He became independent in 1986 and built his first Noborigama kiln which at that time consisted of a firebox and three chambers. A prefab building on the hillside served as his workshop (he uses the lathe technique for his pottery), plus he had a warehouse for his clays (there are two clays in Mashiko: one reddish-brown, the other whitish-grey) , a drying room for pottery prior to firing, and also a reception area for visitors with an exhibition of his works. It was a little crowded and, in addition, in winter, smoky from an underperforming wood stove. After 2011, the Noborigama was reduced to two chambers while the workshop was separated from the exhibition space and visitor reception area  by the construction of a bright and warm wooden extension.

Mr Tanaka’s wife is Catholic. As she was busy with her work, her husband was asked to take their only daughter to catechism, which took place twice a month on Saturday mornings in the neighbouring parish of Moka, where I was the parish priest in 2001. He would stay in his car reading for the whole time of the catechism classes. When I learned he was a potter, I asked him for a commission for the parish: to make a beautiful font for baptism celebrations, which at that time were being done in a salad bowl with orange flowers. Surprised by my request, he invited me to come and see him in his workshop and to explain to him there what I wanted after seeing the kind of pottery he was making, because a baptismal font meant nothing to him at all. The important thing is not to be in a hurry: with firing taking place only three or four times a year and samples to be made, a commission can easily take six months or even a year if the first attempt is not suitable. Thus began a long collaboration and friendship that continues twenty-one years later. Mr. Tanaka was baptised by one of my successors and chose Raphael as his baptismal name!

In addition to his creations for liturgical purposes (baptismal font, a pot with a lid for keeping holy water, washbasin, cruets, aspergillum, pitcher, candlesticks for altar candles or the Paschal candle, also a chalice, paten , dishes, a sort of pyx for the storage and use of holy chrism, etc.) which can be seen in a dozen or soparishes, both I and the visitors I have taken to his house have also been tempted by a number of  his own creations. Since 2015, Mr. Tanaka has also been teaching the pottery workshop at Ma Maison Kôsei Institution for the Disabled three days a week in Nasu, north of Tochigi-Ken. 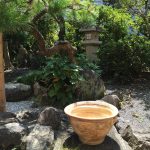 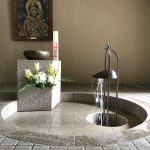 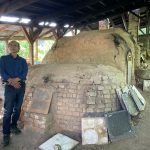