My First Communion in Hong-Kong


« There are some moments in life when all the lights seem to turn green. The important thing is to give in and let yourself be guided ». This is what I was thinking when I was recollecting the events which led me to have my first communion in Hongkong. 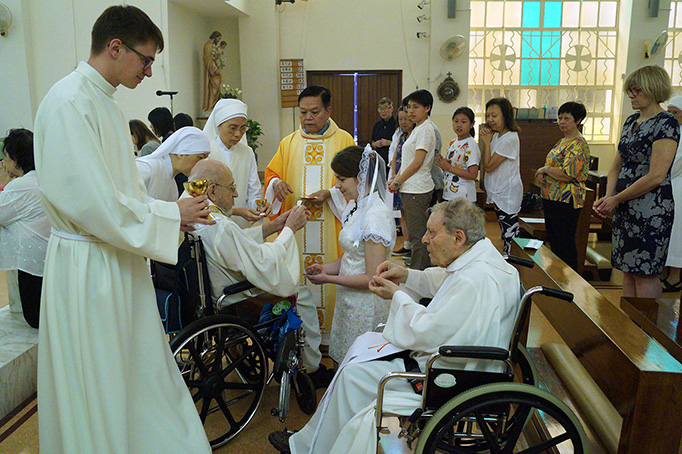 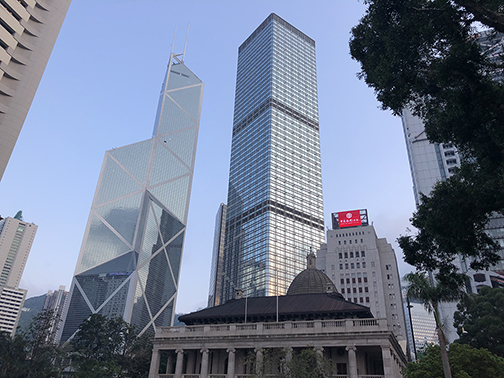 I have kept the questions I had about my faith long buried deep inside of me without having the courage to really face them. Then, little by little, following various circumtances in my personal life, the need to see more more clearly became more pressing. My reticence to launch myself came from knowing that I would never truly resolve all my questions and doubts. After all, our faith is a subject which we meditate on throuhgout our whole life.

Although I came from a traditionally catholic family, it always seemed that religion was a subject we never discussed. We only went to mass on special occasions, and my spiritual life was virtually non-existant. Even though I had been baptised, I had not been instructed in faith. Resolving this matter meant starting from nothing. I had to learn everything from the beginning. I wondered what I believed in and was curious to discover what others believed in deeply too.

It was then that I heard of the MEP and decided to apply, convinced that I would not be chosen. And yet… Great was my surprise when I was called for the interview ! It was a very strong moment for me. I remember Genevieve telling me that I seemed hesitant to take the plunge towards the unknown, and begin this reflexion on my blurry conception on my faith and my beliefs. What was I afraid of ? I could only be beneficial to me. I think I was able to take the first step thanks to her. For the first time, I had in front of me someone with whom I could talk to openly about spirituality and the catholic religion, and who understood me. Before, I had felt these subjects too intimate to discuss (perhaps because we had never talked about faith in my entourage).

A burning desire for answers

The week of training was a very important step in my journey. For the first time, I had the good fortune to be surrounded by people my age who had a faith which made them happy. More than one of them had to face my endless flow of questions. I have to say that this week was very dense and rich in teachings, encounters and in moments of prayer. I learned enormously.

I admit that the first days were very complicated for me. I did not know the codes, the words, nor the gestures, and I often found myself in situations where I did not understand what was going on. From day one, imagine an evening of adoration without knowing what it was and with no one explaining it to me. Then, gradually, I asked questions and I understood things better, and I felt I belonged more and more.

At the end of training, I was at once exhausted and yet extremely eager to go on mission. The vigil of prayer of the previous evening had completely overwhelmed me. I promised to myself to do everything I could to « find Jesus ». What better place than at the Little Sisters of the Poor’s to hear testimonies of an immense faith ? They who devote themselves to the old people they take care of. The profusion of love and goodwill they spread around themselves have deeply touched me. The weeks before departure went by very quickly. Then came the last preparations, the last discussions with my entourage who do not quite understand my reasons for volunteering with the MEP.

My partner Anne-Sophie and I arrived in Hongkong on April 9. Her presence allowed me to share my everyday doubts and questions concerning religion.

At the beginning, I had trouble finding my rhythm in terms of religious practice. I went to mass every morning at 7:15 a.m. Other prayer times paced my day : the lauds were optional. On the other hand, we were invited to the vespers in the Sister’s oratory at 5:15 p.m. Then at 8 p.m., we met in Father Lajeunes’s room to read complines to him. This missionary priest celebrates his 68th year of priesthood and is a colorful resident of the house.

I then underwent a difficult period. I realised that passing from a non-existant religious practice to this rhythm was too demanding for me, despite my will to get involved as much as possible. I go to mass less regularly during the week. The fact that I understood nothing and could not commune made things complicated for me. I then went to mass in french during the week and the weekend. We attended the mass of the french community of Hongkong.

Ten days after our arrival, my cantonese professor summoned me to ask if I would like to have my first communion here, in Hongkong. At that instant, I could not hide my surprise. I had not considered this possibility ! The next day, while going to the complines, Father Lajeune annonunced that, « with all the authority at his disposal », my first communion would take place on the 3rd of June, the day of God’s Feast.

We are the 20th of April and my preparation began. It is organised with Valentin, who was a MEP volunteer for one year and a seminarian, at the pace of two sessions per week, and with Father Lajeune when we could find a moment. I learn alot, and ask Valentin alot of questions, who urges me to question him.

In a teasing mood, I send invitations to my first communion to my family and friends. I invite them to be there the 3rd of June at St Mary’s Home For The Aged in Hongkong. To my great surprise, one person replied present : my mother ! What a pleasant surprise. She made the trip and was there for this important day. The mass was in cantonese, but that did not bother me, since I was with my family of adoption in Hongkong, the elderly of the house, the staff, the volunteers, Father Lajeune, the thirteen Little Sisters, Josephine, my cantonese teacher, and of course my fellow MEP volunteers, Anne-Sophie and Valentin. In the end, I would say that the joy of the mission is to let oneself be surprised and learn to keep one’s eyes wide open to find the joy in simple things.