Four portraits of Chinese missionaries from Singapore: Father Henry Siew, a priest in Singapore trained in Mandarin; Sister Thérèse Tang of the Community of the Beatitudes; and Father Emmanuel Lin, former Superior of the Jesuits in China, based in Macao. The Church in Singapore has celebrated its bicentenary. Its Archbishop, William Goh, appointed Cardinal by Pope Francis, was enthroned this August 2022. Like most of the Catholics in Singapore, this bishop is Chinese but educated in English. Immigrating from southern China since the middle of the nineteenth century, Chinese people comprise 75% of the English colony founded in 1819. Most learned English in order to participate in the life of the country and in response to the requirements of international trade. However, Mandarin Chinese remains one of the four official languages of Singapore, together with Malay (17% of the population) and Tamil (8%). How is it that the Chinese language continues to be used? When they arrived on the island from different regions in the Chinese provinces of Canton and Fujian, the immigrants, who came with nothing, organised themselves into clan-based mutual protection associations against secret societies and also to provide finances for the most expensive life events, especially funerals. Around 1950, some nine principal dialects were spoken in around two hundred associations.

Viscerally suspicious of the ability of the public system of education to transmit their great traditions and also to initiate the study of modern knowledge, the more affluent Chinese opened schools teaching in Mandarin, which had become the official language in China. In 1953 they even founded the prestigious Nanyang University, which trained teachers for the Chinese schools. The university was quickly overrun by Maoist intellectuals and became a problem for the new government of Singapore, led by its Prime Minister Lee Kuan Yew, when it was proclaimed independent in 1959. When the former British colony gained complete independence in August 1965, it was necessary to ensure the cohesion of the multi-ethnic population as well as an open trading policy. The socialist program effectively supported housing, education and health.

Anxious to control Marxist influences, Lee Kuan Yew eventually imposed English as the first language of instruction in all schools. A few more prestigious schools could remain bilingual, including the Catholic Chinese High School, run by the Marist Brothers, and the St. Nicholas Girls’ School run by a Chinese nun of indomitable character. Catholics in these Chinese schools made up barely 10% of students. English schools, on the other hand, were favourable grounds for many conversions, because many of the teaching staff comprised men and women religious from foreign countries with a Catholic tradition. But by becoming an English-speaking Church, the Church lost the valuable contribution of the Chinese cultural tradition. What was worse, the Church was not achieving its mission of bringing the gospel to the Chinese world. Two factors stopped this decline: the first was the contribution of priests from China who could no longer serve in their own country, as it had become communist. This was the situation with Father Paul Tong. The second was missionary training for a small number of  students from Chinese schools and the continuation of Masses celebrated in Chinese in a dozen or so parishes, with the support of their choirs. Father Henry Siew is a testament to this perseverance. Singapore’s commercial and cultural ties with a China that has become a world power are opening up new horizons for Singaporean Mandarin-speaking Catholics.

Henry Siew was born in Singapore on 26 January 1960. His mother was a devout believer who worked hard to bring up her four children. He was a pupil at a Catholic Chinese school where he was able to cultivate his Christian faith in a group of Young Christian Students run by Father Paul Tong. He made him his spiritual director while studying at the Catholic Junior College. After military service, he wanted to study for the priesthood, but Father Tong advised him to go to university first. He majored in sociology at the National University of Singapore. In 1984, he entered the seminary. In 1986, the new buildings of the Singapore Seminary were opened in Punggol. In the programme of study of local religions, Henry chose to study the Tao Te Ching, the fundamental work of Laozi which he was able to read thanks to his training in Mandarin. Ordained a priest in 1991, Henry first did five years of parish service. Then he was sent to Rome in 1996 to study philosophy with a view to becoming a teacher. When he returned two years later, he met the rector of the Fu Jen University in Taiwan, who advised him to study for a doctorate in Chinese philosophy over three years. When he came back from Taipei in 2000, Henry became a trainer and teacher of philosophy at the Saint Francis Xavier seminary. In 2005, he was appointed parish priest of the new parish of Saint Anne and, in 2007, the archbishop transferred him to the original church of this peninsula of Punggol, the Church of the Nativity of the Blessed Virgin Mary. The region is populated by Catholic Teochew descendants of refugees expelled from China around 1925 by the revolutionary Pengbai’s new soviets. They needed a priest who spoke Teochew, Mandarin and English. Since his return from Rome, Henry has become director of the diocesan commission for the apostolate in Chinese. There he assists in particular in meetings of Chinese-speaking groups. These meetings export their sessions to China itself, thus expanding their missionary activity to the whole Chinese world. Asked by the Singapore Catholic News on April 22, 2016 what most inspires his activity, Henry Siew replied, ‘I have become increasingly convinced that building community is one of the most important aspects of our pastoral ministry’.

Son of a Catholic teacher from Singapore, Emmanuel was educated in Mandarin and befriended some YC members. At Catholic Junior College, he was known for his broad smile that quickly turned into peals of laughter. It may be for his spontaneity or for his friendliness that he was nicknamed ‘panda’. In 1980, he quickly joined the Zhonglian team. He introduced Maria Ng who then worked as permanent secretary of the group for the next thirty years.

In the autumn of 1982, he himself served as Zhonglian’s secretary. He embarked on an eight-day tour of Malaysia with five group members. They explained to Chinese Catholics that they could support the revival of the Church in China. They received a warm and encouraging welcome, because the Malaysian Chinese, who are very controlled by the Malays, are more attached to their ancestral land than the Chinese in Singapore.

In 1986 and 1987, Emmanuel was received in Paris at the MEP hostel for Asian students who were studying for doctorates. He studied psychology there. Should he be encouraged to become a missionary in the future? Father Étienne Perrin, MEP, thought otherwise. Emmanuel returned to Singapore where he worked with drug addicts. At the end of May 1990, he made his first visit to Beijing with two other members of the Zhonglian group. Then he resolutely entered the Jesuit training course without being discouraged either by the discipline or the length of the studies. He was ordained a priest at St. Ignatius’ Church on January 29, 2000. He then did some years of service in Rome in the Chinese broadcasts of Vatican radio. In February 2011, he took his vows as a Jesuit at St. Ignatius Church in Singapore. He was then sent to Macau where he became superior of the Jesuits in China. Shortly before the outbreak of the Covid-19 pandemic, he was recalled to Rome where he works in the Vatican’s Foreign Affairs Department.

Thérèse Tang of the Community of the Beatitudes

Thérèse Tang already knew Chinese-speaking YC members in Singapore, then broadened her horizons by going to France. She established herself in the Community of the Beatitudes. Emmanuel Lim told her about it, because he himself had frequented this evangelical revival association. When visiting the MEP in Paris in October 1993, she shared her passion for the China mission. Two sisters, she said, had already left for Taiwan.

In August 1997, she hosted the annual session of Chinese theology students in Europe in Lisieux. A meal was served at Hermival for the forty or so priests and nuns from China. On December 8, 2000, she took her solemn vows in the community of Blagnac near Toulouse. Her Chinese friends from Paris, Father Paul An and two nuns from Manchuria, came to participate in the celebration.

In September 2005, she was in Paris with about fifteen Chinese priests for whom she organized an international retreat in Ars. They celebrated a Mass in Chinese in the chapel of the Daughters of Charity at 140 rue du Bac and had their meal at the MEP. The spiritual training and the testimony of faith of the priests of China haunt Thérèse’s mind and heart. She organized a great movement of prayer for them and writes a blog with theological references under the title Rain of roses.

On mission in Macao in the Community of the Beatitudes of Tapa, she continued her service, providing retreats for priests from the mainland. She fell ill, and was recalled to France in 2018 and placed in the Beatitudes retirement home near Lourdes. She continues providing spiritual support for retreatants as well as disseminating the most significant passages of pontifical messages on the internet. She is a great Chinese apostle. 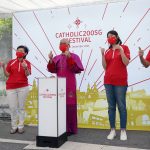 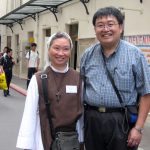 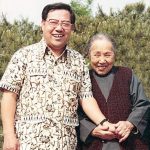