The little old lady with the rosary


Near Chanthaburi, in a small parish, there is a little old lady who is always active and involved in her church, putting a lot into her community. She works in the background, usually no one notices her, until the day that… She is a nondescript old lady, but she is there every Sunday. Her parish is pretty nondescript, too: a small village church less than 15 kilometres from the magnificent Chanthaburi cathedral. Too far away to benefit from its aura, too close to keep its faithful. So it is only about twenty people who come on Sunday, mostly elderly like her; but the priest comes anyway, he says it’s important.

It is she who comes the evening before to put flowers in the church. Oh, nothing fancy, but still, some flowers. She keeps her loveliest bouquet for the statue of the Blessed Virgin Mary because ‘well, she gave everything to Jesus, so you might as well give it to her’. It is also she who opens the rickety doors in the morning. Then she prepares the sacred vessels, unfolds the priest’s chasuble and switches on the sound system – it crackles a bit at first, so you have to switch it on early. Finally, when everything is ready, microphone in one hand, rosary in the other, she begins to recite a veritable army of Hail Marys. The faithful arrive gradually, always the same ones. She prays for the priests and for vocations, as if to compensate: of her seven children, not one has had a religious vocation and, even if they do come regularly to visit her, she is a bit lonely since her husband died.

On that particular Sunday, she was on her third decade (one decade for the bishop, one for the priests, and same again for vocations in her diocese of Chanthaburi, one for her children and one for all the misfortunes of the world for good measure). Then something unexpected happened. She could tell right away that a new voice had been added to the usual mumbling. A calm voice, self-confident, which ended the prayer without wavering. First just one, soon after that two, then three, ten, thirty and sixty joined in – and the chapel was filled with bright and triumphant Hail Marys, with the voices of young men. When all had filed in by the fifth decade of the rosary, still she did not quite understand. Then she understood what her eyes and ears were telling her: the whole of the minor diocesan seminary was there, at her side, radiant with youth and fervour, from the father superior to the youngest seminarian.

Her own voice did not hold out much longer, she could only sob through the next Hail Mary. Nobody had warned her. Perhaps even the priest had deliberately not told her. How mischievous to put her through such emotions! She willingly handed over the microphone to two young seminarians who, at a signal from the father superior, rushed over to support her and take over from her, kneeling around her. No matter how much she wiped her face, her rosary ended in tears. The Lord, through the intercession of the Blessed Virgin Mary, had answered her prayers in such a moving way. She was well aware that there was a minor seminary in Siracha, at the other end of the diocese, but she had never imagined that they might come to her, bring so much life into her little church, she who had prayed for them for so long.

The priest was direct in his sermon; he told the seminarians, some of whom would one day be addressed as ‘Father’, never to forget that they would always remain the children of all the churches in their diocese, however modest they may be, and of all the parishioners who prayed for them with so much heart and hope. The little old lady cried ever more, her meagre supply of handkerchiefs running out. She did not want to be in the photo with the seminarians, despite all their insistence and the consideration they showed towards her. It was just too much for her and, with all her crying, she said she was no longer presentable.

This little old lady probably does not know the prayer that the whole choir of all the religious sing on her behalf at nightfall, continuing the uninterrupted relay of her prayers: ‘Nunc dimittis servum tuum Domine…’ 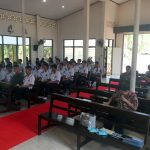 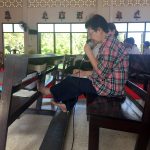