Father Kermoal has been a missionary in Korea for forty-seven years. Although he retired five years ago, he still remains very involved in local pastoral care. You can see the whole of his article in edition 577, page 24 […] This is what I wanted to share with you: some encounters that shook up my life as a retiree in recent times.

Her name is Jun. She is a young woman that I met some time ago. She is 35 years old and she is married. She is a Protestant. She gives drawing lessons at the Art Institute. The first time I met her, I thought she was a schoolgirl, she looked so young. A year ago, on Christmas Eve, she telephoned me in tears: ‘Father, it’s Christmas, but for me, this is a very sad night. A friend has just rung me. She is about to commit suicide because her life has no joy, no happiness. Her husband left her. I think I’m going to go with her and die with her because I have no happiness in my life either. My husband has left me, too, to live with another woman. I am ringing to say goodbye.’ I was asleep when I got this phone call at around two in the morning. But, when I heard this cry of despair, I woke up. I listened to Jun, who was in tears, until the morning and, at the end, I said to her: ‘Jun, you can’t do what you have said you are going to. You can’t commit suicide. If you do, you would also kill your mum and your sister. And, anyway, you can’t do it because tomorrow you have a meeting with me. We should have a meal together. You should respect this appointment. See you tomorrow, Jun.’

I put the phone down and, the following day, I waited anxiously for Jun to arrive for our meeting. And she came! She said: ‘Father, if I hadn’t phoned you yesterday, I wouldn’t be here today, I would be dead like my friend. You saved my life.’ Since then, Jun comes to see me from time to time. We have a meal together, she tells me about her mum and her little sister, who has a brain tumour. Sometimes she also comes to the Mass that I celebrate in our MEP premises because, due to a lot of building works, I am not able to say Mass every day at the Holy Family Hospital. I only go there on Sundays. Jun still feels pain about her husband. He wants to divorce her, but she doesn’t want a divorce. She is waiting for a decision from the courts. She often talks to me about it. Even though we priests may retire, we are still pastors when it comes to accompanying persons like Jun, travelling along some part of their journey with them. We don’t know the outcome, or how all this will end. The important thing is just to be there, to love people as much as we can, within our own limitations. This too is living the Gospel, bringing the Good News.

It’s just a few months ago that I met Romain. He is a young man, French, who came to Korea some years ago. In fact it was last May that I met him, on Buddha’s birthday. Another French person who works with the Embassy, and who looks after young French people who get caught up in the Korean judicial system, asked me to put him up in the MEP building in Seoul. He told me: ‘He has been sentenced to six months in prison. The judgment is not clear. He doesn’t look like a bad man. He has to give himself up to the authorities on the 1st of June. So he should stay at MEP for two to three weeks. Thank you.’ So Romain arrived that evening with his two big suitcases. ‘I’m Romain’ he said to me. ‘Thank you for taking me in. I’m not going to cause you any problems.’ Romain stayed until June 1st.

We often ate together. He liked that a lot. I also introduced him to Koreans who came to the house, always telling them that this young man had to spend six months in prison. I was surprised by their openness to him. They sympathised with him. A person sentenced to prison should not be seen as a leper by those around him and banned from social contact. Jesus taught us to accept people as they are and to walk with them. As a priest who is retired, but still a pastor, I have to be welcoming to whoever crosses my path. And then, June 1st arrived. Romain prepared a few things to take with him when he went to the prosecutor’s office. I went with him. He filled in some forms and two policemen put handcuffs on him to take him to prison. I have to say that was a shock for me to see him in handcuffs. I can understand putting handcuffs on a criminal who has killed someone and could kill again, but to handcuff Romain, who had been free to travel round Seoul as he pleased since he had been charged two years ago, that to me seemed an injustice for which the justice system itself is responsible. Romain does not present a danger to society. It’s a way of mistreating human beings that the justice system should reconsider.

So Romain went to prison on June 1st. Jun , a young Frenchman and myself took turns on a voluntary basis to visit him. Actually, he can only have three visits of ten minutes each per month. It’s very little. In June we were able to visit him three times but in Korea, with the number of Covid-19 infections rising, the security level in Seoul was raised to 4, which meant the cancellation of all prisoner visits. Since July, we haven’t been able to visit Romain, nor even send him books or magazines. We waited for the security level to be reduced. But, even though he was behind bars, Romain remained in our hearts and our prayers. Although he was unable to have visitors, from time to time he sent me a letter from prison telling me about his life there. He was freed on November 30th.

It is these little invisible life events, unimportant but vital, that constitute the life of a retired missionary who always tries to remain a pastor for the people who cross his path. 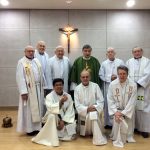 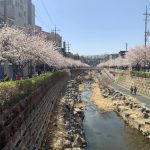 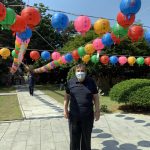 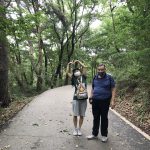