For the past three years, a small group from Taipei’s Rosary parish has been going every Wednesday evening to Taipei’s central station to provide assistance to homeless people taking refuge there. There are many homeless people who sleep along the four sheltered sides of the huge rectangular building that is Taipei Station. After a short prayer asking for help from the Holy Spirit to see Christ’s presence in the people visited, we go in twos to the south, north, east and west entrances of the station. The principle is simple, it’s a visit. We sit down with the homeless and we chat for a little while. This is how it all started three years ago when, while waiting for a train, I started chatting to a very pleasant elderly gentleman, Chen, who was sitting by the south entrance. The conversation must have been pleasant for both parties, as we arranged to meet again the following week, and then again a week later, and the one after that. During our meetings, I also met his neighbours on the pavement: Zhang, Zheng and others. I saw that many Buddhist, Protestant and other groups were coming in the evening to distribute food parcels, but no one stopped to form any kind of a relationship. ‘Eh, Father Lou, why didn’t you come last week? I was waiting for you.’ The smile that was there to greet me, that was the call. I suggested to a nun in my parish that she should come on these visits with me. Then another one came, then some parishioners joined in. I ask them to come with empty hands, with nothing to give other than their time and their presence but, together with their person, there is the light of the Gospel. Entering into a relationship with nothing material to give is a small initial challenge. It is easily overcome and the fact that people are there each week is the living proof. It is this which brings true rewards. In Taiwan, social services are practical and well organised. There are numerous charitable works involving material help. There are not as many homeless as in France, and most of them gather in Taipei in two principal locations: along the Long Shan Buddhist temple and in the central station. Despite the size of the group, what is particularly striking at the station is the profound loneliness. For the overwhelming majority, it’s not poverty that has made them homeless, but broken family ties. Relationships between them are also often strained. Some people who sleep side by side over the course of several years do not know their neighbour’s name. This is why we come to ‘visit’ them. ‘I was in prison and you came to visit me’ (Matthew 25, 36).

We met Cai, who was one of the residents at the east entrance. During our conversations, he told us that he was baptised as a child and attended his first Communion thanks to the sisters at the kindergarten where his parents had taken him. Then he forgot it all, left everything. Thirty years had passed when we met him begging at the station. As he was a Catholic, I invited him to a Mass that I celebrated for the souls of homeless people who had died over the course of the year. He was so happy to reconnect with the Eucharist that he then came very regularly to Mass in my parish on Sundays, which was seven metro stations away. He was warmly welcomed by the parishioners. At the beginning of December, he told me he would like me to celebrate a Christmas Mass for the homeless people in the station, to be followed by a good meal. Apart from him, I didn’t know any other Catholics at the station, but even so we immediately accepted his request. Just next to the station there is a building belonging to the Scheut missionaries. They were kind enough to provide us with a small chapel and a large room. On December 25, everything was ready to welcome our friends, but Cai was not there. A week earlier, a severe foot infection had taken him to the hospital’s emergency department. Before going to the station for the Mass and evening meal, I went to see him at the hospital and gave him the Eucharist. He was profoundly happy to be able to take communion on Christmas Day and to hear about the festive meal that was being prepared. It was indeed a very joyful event. About thirty homeless people came and some young people were there to lead the Mass. At the time of communion, many who had been at the station with Lin HongZhou came forward to ask for a blessing. Then it was time for the meal, which included dishes from one of the best caterers, and then karaoke and bingo. The following week, all the homeless people we had met had passed on the message that there had been a magnificent evening organized for them by the Wednesday Catholics. But we never saw Cai again. He died in hospital of his infection a few days after Christmas. We were of course very affected by his death, but also felt gratitude, because we saw in the final events of his life the divine providence that had prepared for his passage. Was it not the hand of God that made our meeting possible, that Cai rediscovered a taste for the Eucharist and came to pray regularly with us, that he himself became an apostle for his companions on the street by inviting us to share the joy of Christmas, before leaving like the good thief to meet his Lord? Since that first Christmas, two more have followed with more than seventy homeless people taking part last year, merrily singing our carols. Cai, whose memory is precious to the members of our group, now works up there to make our visits truly missionary visits.

A good ambassador in heaven

It is the consistency of the members of our group in going to these Wednesday evenings that enabled three homeless people to receive the light of Christ. The first of them, Lin HongZhou, a former prisoner who wanted forgiveness for his sins, was baptised in 2020. Since then, he has found a small room to rent where his godfather regularly visits him. In 2021, two homeless women, JunPei and CuiQing, were baptised after completing the parish catechumenate. The bonds created during the catechumenate have led some of our neophytes to participate in our visits, and this has rooted them deeply in the faith. Thus, CiYu, one of the people baptised in 2020 at the same time as Lin HongZhou, regularly invites Xu, a homeless lady with whom she bonded at the station, to her son&#39;s cello concerts. Zhang, who is usally the first person we meet at the station’s south entrance – and whom we have nicknamed GaiBang BangZhu (‘leader of the sect of beggars’ – the name is based on the hero of a book about martial arts by Jin Yong – it’s a shared passion) – always joins in our prayers at the beginning of the evening’s trawl. Although he’s not a Catholic, he now makes the sign of the cross. Towards the end of last year, one of the young people in my parish invited five Catholic students from his university to experience an evening’s visits with us. Ten days later, one of them called me because he wanted to start a group with other young people at XinDian station, which is close to them. They now go on these visits faithfully every Thursday.

The Little Sisters of the Poor: Chen’s providence

In November we were very concerned about Chen TianSheng, the first homeless person we had come across on our visits. This gentleman, who was 81 years old, had become seriously ill. Together with the person in charge of our little group, Chen LiangFu, we went to visit him in hospital and we encouraged him to accept a place in a public residential home that was being offered to him by social services. But he said to me: ‘Father Lou, I won’t go there because I know that many people commit suicide there, I would prefer to stay on the street.’ Without being too hopeful, because I know their home is very full, I told him that I could invite one of the Little Sisters of the Poor from Bali, a town to the north of Taipei, to visit him. He answered: ‘If it’s nuns, ok’. A few days later, Chen left hospital and we saw him, looking much thinner, in a wheelchair, in his usual place at the station. I called the Little Sisters who agreed to visit him. But he did a runner and he disappeared without giving us any notice. The group began to pray that he should not die alone in the street. Three weeks later, we saw him again – he had been back in hospital – he was just skin and bones, unable to eat and half-blind. The hospital, which had a policy of not keeping anyone for more than twenty days, had sent him back into the street. He said to me: ‘I think I’m going to die soon, that’s destiny.’ And we could see that he was probably right. At that moment, a torrent of abuse fell on me and the members of our group. It came from a middle-aged man, who was often drunk and aggressive towards us and the other homeless people at the south gate. He was shouting angrily that we were good-for-nothings, windbags, and that he didn’t want to see any groups of Christians at the station. We understood that he had a lot of affection for the old man and couldn’t stand seeing him in this state, so we just had to listen. In our anguished concern about Chen’s condition and under that man’s torrent of abuse, we called the Mother Superior of the Little Sisters of the Poor, Sister Marie-Odile, who generously agreed to see Chen quickly. They immediately connected and, after a lively conversation with him and with the nuns, Sister Marie-Odile took a quick and generous decision to take him in. Chen said: ‘There is salvation for me!’. Our group was deeply grateful to providence and the faithful disciples of Saint Jeanne Jugan. The best thing was that the man who had insulted us came personally to help the sisters put Chen into their car to take him to ‘My Home’. Since then, his attitude towards us changed completely and he always thanks us when we give him news of Chen. Thanks to the wonderful care provided by the Little Sisters, Chen has regained some weight, is gradually becoming used to his new life and doesn’t worry any more, apart from the situation with his eyes. One of the Little Sisters who welcomed him when he arrived at the retirement home heard him say: ‘耶穌，我來了− Jesus, here I am.’ As his first name 天生 means ‘born in Heaven’ in Chinese, it is our sincere hope that Chen fulfils the meaning of his name at the Little Sisters’ home. 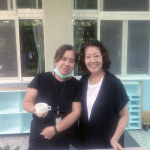 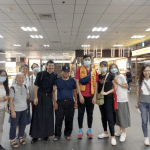 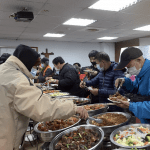 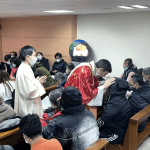 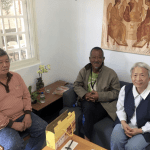 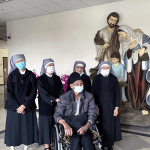 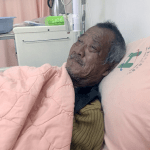