The Spirit of God that surprises us


The weeks of isolation and solitude that we have been experiencing have been a time for memories to surface. In this context, Father Michel Arro, who arrived in Singapore in 1957, remembers a ‘Divine smile’ that came with the arrival of Caroline in the parish of Saint Theresa. Caroline is a Chinese lady in her fifties who works as an executive secretary in a company that imports essential oils. She regularly goes to the gym and enjoys driving her car. She is single and lives in a large complex on the twelfth floor and likes to hop over to Bangkok in Thailand for the weekend two or three times a year. On the agenda: shopping and restaurants.

She is a member of the parish council and is full of energy. She likes to see results and the Spirit of creativity inspires her. A creative spirit and one that surprises us.

When she was approaching her thirties, Caroline was finding life a struggle. At home, her mother followed the Chinese tradition of giving priority to her sons. Caroline and her sister were barely accepted and recognised. Her anger and frustration made her difficult and aggressive in her relations with other people. She showed her desire for freedom and independence by leaving the family home and renting a room in a big complex in Tampines New Town. But what could she do at weekends? She did not know anyone, ate all alone in a little shopping mall, and slept…

One Sunday afternoon, at about 4 o’clock, she decided to go out. She got onto the first bus that stopped without paying attention to where it was going and, after twenty minutes, decided to get off without knowing where she was.

She went up a staircase leading to a development of private houses with flowers in their gardens and finished up in the car park in front of a church. For her, religion was something unknown and of no practical use.

There was a group of people there, who seemed lively and very much at ease with each other, they were chatting and laughing. Caroline observed them and one of them came over to her with a warm smile and said ‘You are very welcome, today we are starting a new introduction to baptism. You have come at just the right time!’. Very gently, he invited her to go into the meeting hall under the church where there were already about fifty people. He then introduced her to several people who told her about the meeting. She did not really understand what was going on but she let herself be guided. After all, why not? She had nothing else to do. She felt at ease among these people and she was interested in what she heard. At the end people said to her: ‘Bye, see you next week’,

But a week later, she hesitated. What was the point? Then she had a telephone call inviting her to go back. So why not? Alternatively she could stay in her room and watch TV – but she had had quite enough of that! She went back and began to enjoy the meetings. She asked questions; someone would come and sit with her. After about two months, someone asked her ‘Do you want to continue?’ It was the Rite of Welcome. Without giving it any thought, she said yes. There were many issues that she did not agree with, particularly with regard to one’s neighbour and forgiveness. She argued and debated but, at the same time, she learned to pray and Jesus became a reality for her. There was someone in her life. She felt comfortable with the priests who taught the catechism and had individual meetings with them. But were all the people in the church really sincere? Some of them were hardly role models! Some of them she found plain annoying. Then came the first Sunday of Lent and the Rite of Election. ‘Do you feel ready for baptism?’ She was tempted to wait another year. ‘Has the Catechumenate brought anything new into your life?’ ‘Yes, I take time to pray, I don’t get angry as often with my colleagues, and I visited my mother a few times.’ The wounds of the past were still there, but there was something new. So what should she do? The point of no return arrived and, after a weekend’s recollections, she said yes with all her heart. The weeks leading up to Easter, with their prayers of purification, helped her to accept her own need for purification, and she felt renewed, alive, and part of a family. Then it was the time for baptism and confirmation, and she felt close to the godmother she had chosen.

The mustard seed continues to grow.

Years have passed. Caroline is still lively and full of faith despite various trials, and she has served in different roles in the parish. She continues to set high standards for herself – that is her nature – but she is patient with others, listens to them and is always ready to accompany them and help them. On several occasions she joined catechumens on their journey towards baptism and agreed to act as godmother. Meeting her is always a tonic and a good discussion on a controversial subject shows that she wants to continue growing. Her mother is approaching her 90th birthday and she visits her more often, even if there are still tensions.

Thank you, Lord, for Caroline and for the path you made her follow. The Spirit who surprises us. Thank you, Caroline! 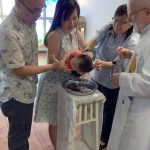 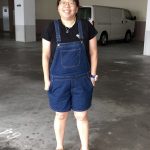 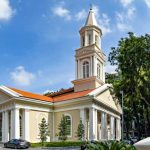